Conceived and designed by French ASLer Laurent Cunin, the Provence Pack is a pack of 10 themed scenarios featuring the Free French in battles in and around Toulon in southern France in August 1944.  A variety of French, American, and British ASLers playtested the scenarios in the late 1990s; the Provence scenarios later appeared in the French ASL magazine Le Franc-Tireur in 1998.

MMP liked the Provence Pack, but for some reason decided not to print and sell it but instead just offer it as a download from the MMP Web site (the official reason is that MMP “had no way to fit it in the schedule”).  While the price certainly cannot be beat–free is always appreciated–this decision had the strange effect of making the Provence Pack a “forgotten” ASL product.

The Provence Pack also holds the honor of having (as of 2014) the only full-color scenario cards in any official ASL products.  It can be downloaded at http://www.multimanpublishing.com/downloads/pp.zip.

Though the quality overall is uneven (it is not clear whether MMP did any development on the pack after its submission), several of the scenarios in this pack are fun and worth a try. 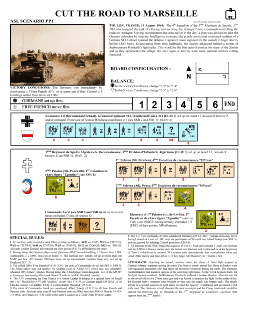