ASLers received a pleasant surprise in late 2008 when Lone Canuck Publishing (i.e. George Kelln) announced the release of its first historical module, after years of releasing only scenario packs.

The centerpiece of the module is its historical map, which represents a good chunk of Hill 192 and some of the surrounding terrain.  The artwork is excellent and the map is one of the best first-time efforts for a third party publisher.  The art is clear, the colors well chosen, and the mapboard very interesting.  It’s a very good job.

Given the attractive map, it is a bit disappointing that there are only 4 scenarios that take place on it.  Each one uses a portion of the map (a quarter or slightly less each, basically).  The scenarios are smallish (the largest one pits 11 squads and 2 AFVs against 8 squads).  One uses OBA.  All could easily be played in a tournament setting.  However, it is a shame that there is not a more meaty scenario.  The scenarios have not received much play to date, but early indications suggest some may be unbalanced.

Consequently, the Campaign Game assumes a correspondingly greater importance.  Happily, it is only 5 campaign dates long, which makes it manageable in size.  The campaign is a “true” campaign, in that it is not linked scenarios, but rather a continuous set of campaign dates as is traditional with official ASL campaign games.  Purple Heart Draw includes a complete set of campaign game rules, which seem to be based on official campaign game rules.  The American player has a bit more toys to choose from in terms of buying units, but both sides (as basic infantry forces) are relatively limited.  This is not a drawback; both sides have things to choose from.  Campaign game rules are hard to write, so it will be interesting to see how “watertight” these rules turn out to be.  However, they are far better organized than Critical Hit’s Platoon Leader set of CG rules.

Overall, Purple Heart Draw is a very attractive package, despite the low number of scenarios, and it is relatively inexpensive.  It looks like it could be a nice introduction to campaign games for ASLers.

2017 note:  In the nearly 10 years since Purple Heart Draw was released, it has gotten a fair amount of play for a third party product.  While considered fun to play, PHD’s recorded playings suggest that many of the scenarios, as well as the campaign game, may be unbalanced.  This suggests that Lone Canuck should consider releasing an updated edition that would adjust the scenarios and campaign game accordingly (this would also be an opportunity to add a scenario or two). 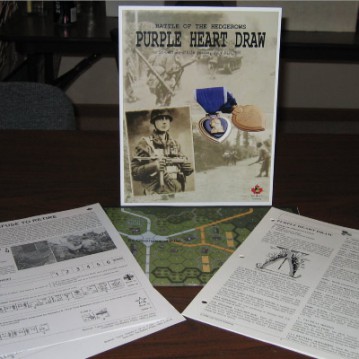