Perhaps the most unexpected and unheralded ASL release in 2007 was the Pusan Perimeter Pack, a boutique item created by the so-called Kansas City Irregular ASLers for attendees at the 2007 March Madness ASL Tournament in Kansas City, Kansas.  In the 1990s, this tournament was well known for giving out exciting ASL items to tourney attendees, thanks largely to its relationship with third party publisher Kinetic Energy.  The Pusan Perimeter Pack seems to have been an effort to recreate this excitement, though the minimal prior announcements about the pack means that it might not have attracted many additional attendees.  Most people in the ASL community only heard about the existence of this item months after the tournament when a copy of the pack was offered for sale on E-bay.

The publisher claims that only 50 (numbered) copies of the pack were produced, a claim that, if true, would make the Pusan Perimeter Pack one of the rarer and more collectible ASL items.  The rules in the pack are said to be based on “excerpts from the full Korean War ASL (KWASL) Module rules in development for MMP” and each page has “Fire & Ice Draft” at the top.  The included rules contain some minor terrain modifications (the most important of which is that grain becomes rice paddies), some LATW modifications/additions, and some flares and starshell rules, but primarily introduce the Korean-era Americans and North Koreans.   American squads include 6-6-7 airborne, 6-6-7 elite, 6-6-6 1st line, 5-4-6 2nd line, and 5-3-6 green troops.  There are rules to reflect early war U.S. unpreparedness.  The North Koreans are mostly treated as Russsians.

The six scenarios are all set along the Pusan Perimeter (the last-ditch defensive perimeter held by the US and South Koreans following the North Korean invasion until they broke out of the perimeter in the wake of the Inchon invasion) from July through September 1950.

Though released at a tournament, most are too large for tournament play.  PuP1 (Super Bazooka) depicts 4 T-34 tanks duking it out with a few American squads and does not particularly look fun.  PuP2 (Hey, That Ain’t a ROK!), a large scenario, depicts an American fighting retreat from semi-entrapment, and looks like an interesting tactical situation.  Pup3 (Bullets for Breakfast), another large scenario, depicts a dawn North Korean assault on an American perimeter.  Pup4 (The Grist Mill) is a small, short and sweet North Korean attack on an American position with a .50 cal MG.  Pup5 (A Line Too Thinly Held) is a large North Korean night attack (with OBA) on a lightly held American position (and looks a bit tough on the Americans).   Pup6 (The Road to Waegwan) actually features a large American attack, with Air Support, against a fortified North Korean position. 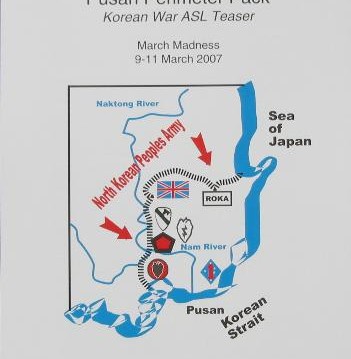