Pete Shelling is a long-time and prolific scenario designer who has produced a number of classic designs for a number of publishers, official and unofficial alike.  He has had a fruitful relationship with Schwerpunkt, who over the years have published no fewer than 18 of his designs, making him the most prolific “outside” designer with whom Schwerpunkt’s core group of designers and playtesters have had a relationship.

There was no particular call for a Pete Shelling “hall of fame” pack–and, indeed, as of this writing all of the Schwerpunkt issues in which his scenarios originally appeared are still available for purchase.   Pete Shelling himself seems to have been unaware that such a product was going to be released.

Unfortunately, the scenarios all seem to be published “as is,” rather than having been adjusted for balance because of the passage of time.  This means that this mix of scenarios includes a few possible dogs or unbalanced scenarios.  For example, RPT91 (originally SP130) currently has a record on the ROAR website of 18 German wins vs. only 4 Russian wins.

The scenarios (with ROAR ratings as of this writing in italics) include:

Schwerpunkt’s previous reprint Rally Point was a “best of” volume, so the issue of balance basically would not have come up.  However, here a few of the scenarios definitely give one pause about whether or not they may be balanced as originally published.  Providing such so-called “balance errata” is something that ASL publishers frequently do when reprinting old scenarios so that people newly encountering them have a better chance of a better playing experience.  That is something that perhaps should have been considered for two or three of the scenarios here.

Most of the most popular Shelling scenarios have been published elsewhere other than with Schwerpunkt, so the scenarios here are a bit of a mixed bag.  One exception is the very popular RPT97 (Encircle This).  The only scenarios among those offered here that were previously singled out by Desperation Morale are RPT97 (Encircle This) as well as RPT98 (Tatra Salad).

The scenarios here are certainly not bad, but essentially this is a product for completists.  There is really no reason to purchase this pack as opposed to getting the scenarios in their original form–as well as all the other fun scenarios in those various issues of Schwerpunkt. 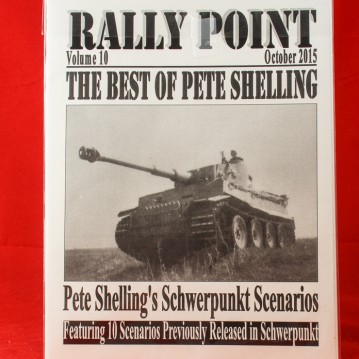