Most ASLers who buy Schwerpunkt products will already have these scenarios.  Evan Sherry suggests that the pack is intended for “players who may not have been able to acquire” volumes 11-20, but all of those issues are readily available inexpensively from online retailers.  The only practical purpose this product serves the ASL consumer is as a “sampler platter” for someone who has not tried Schwerpunkt at all and wishes to see if they might like it.  It might also suit someone who is not particularly enamored of Schwerpunkt scenarios in general but wouldn’t mind getting a compilation of some of their better scenarios.  These are limited audiences.

All of the selected scenarios were designed by Evan Sherry.

For someone who hasn’t tried Schwerpunkt, this is as good a place as any to start, as the scenarios here are all tried and true.  For a Schwerpunkt regular, this offers nothing new. 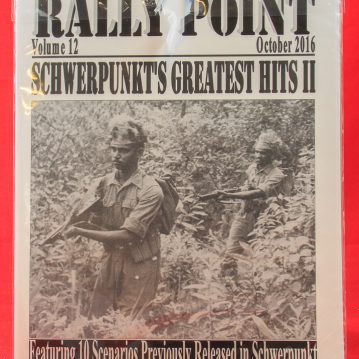