After many years of releasing their products in conjunction with the annual ASLOK tournament in early October, Evan Sherry and his Schwerpunkt buddies abandoned the tradition, primarily because they also abandoned going to ASLOK–and also seemed to have abandoned the Schwerpunkt magazine, at least for the time being. As a result, Rally Point scenario packs such as this one have been released irregularly over the past couple of years.

Rally Point Volume 16 is subtitled “A World at War 1937-1945.”  Normally, Rally Point packs are themed packs, while issues of Schwerpunkt have un-themed scenario mixes, but the scenarios here are actually the scenarios that would have appeared in Schwerpunkt Volume 24, which seemingly has been abandoned. Thus “A World at War 1937-1945” is just an attempt to give a nominal theme to what are actually a bunch of unthemed scenarios designed by Evan Sherry, Mike Augustine, and Dave Brown.

As of this writing, the scenarios of Rally Point 16 have not gotten a lot of playings recorded on sites like ROAR; part of this is probably due to its off-ASLOK release, as many ASLers at ASLOK like to play newly-released scenarios there (and thus a number of them get recorded to ROAR).  The scenario that has so far been played the most is RPT160 (Willie Und Fritz), but early results are hinting at a tilt towards the Germans.

The pack does have a number of interesting offerings.

RPT151 (Luodian Lament), despite its awful title, may please players with some Chinese-Japanese action. In this scenario, 19 Chinese squads (12 of them elite), aided by OBA and rather well led and armed, too, must wrest stone buildings away from a defending force of 11 Japanese squads (6 of them 2nd-line). Because it’s an all-infantry action, the scenario will likely play faster than the squad sizes suggest.

RPT152 (Shaken Not Stirred) provides some France 1940 meat to dig one’s teeth into. Here 17 French squads, nicely led and armed to the teeth, accompanied by a half-dozen tanks, strike at a defending German force of 12 squads and three Guns. Meaty 1940 actions are often quite fun to play.

East Front meat eaters may appreciate RPT154 (Mars Begins). On the space of a single board (3a), a Soviet force of 20.5 squads (a mix of elite, conscript and first line, separated into three groups) and 7 AFVs (including two Lees and a KV-1), aided by a bit of Rocket OBA, must attack a German defendin gforce of 11.5 squads, 3 tanks and a halftrack, OBA, and a bunch of fortifications. The scenario also includes a very rare (for Schwerpunkt) flavor SSR: at the end of each Rally Phase, the Soviet player must choose one location with broken Soviet units and attempt to rally those units as if there were an 8+1 Commissar in that location. This occurs even if those units already attempted to rally in that Rally Phase but failed.  Failure results in the normal Commissar punishment for failure. There is a lot of action here in a small space.

RPT156 (Wiking Rescue) does indeed present a “rescue” situation. A German force of 8 squads is isolated in one section of the playing area, while a second German force of 10 Waffen SS. squads and a bunch of Panthers and halftracks have to break through a cordon of 15 Soviet squads and 6 assault guns. The Germans win by clearing Soviets from most building locations while preserving at least 3 of their halftracks.

The smallest scenario is RPT158 (Hungarian Hetzers), which features a small force of 6 Hungarian squads and–you guessed it–three Hetzers defending buildings from an attacking Soviet force of 8 squads and 5 AFVs. The Soviets only have 4.5 turns, so they can’t waste time.

Overall, the pack seems like a nice acquisition for ASLers. 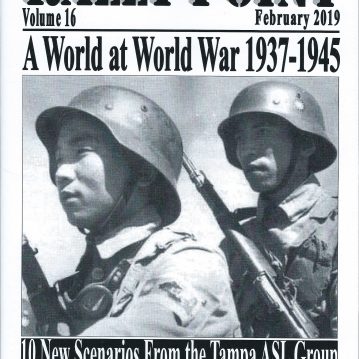