That game of life is hard to play
I’m gonna lose it anyway
The losing card I’ll someday lay
So this is all I have to say
(from “Suicide is Painless,” Theme song to M.A.S.H.)

The game of life is not the only game hard to play; so too is ASL, whether playing a scenario set in the dusty deserts of North Africa or, thanks to the release of MMP’s Forgotten War module, the bitterly cold hills of North Korea.

Rally Point Volume 17 offers ASLers 10 more opportunities to lay down their losing cards while simulating Korean War tactical actions.  It is a follow up to their first Korean War pack, Rally Point Volume 15. As of this writing, the Schwerpunkt guys have published more Korean War scenarios than has MMP, the creator of Forgotten War.

A bit of full disclosure may be required here: Desperation Morale write-ups of Forgotten War-related products may display a certain lack of enthusiasm. Readers should be aware that this paucity of passion is in large part related to your Humble Author’s substantially negative take on the design and components of Forgotten War itself (look for the forthcoming write-up on this site), which of course makes it difficult to generate too much enthusiasm for supplementary products that rely on Forgotten War. This is not the fault of those products, of course.

Whereas Rally Point Volume 15 concentrated on the first months of the Korean War, before the Chinese intervention, Rally Point Volume 17 expands the range of actions up to April 1951 (stopping before the mobile phase of the war ended).  However, it also includes several scenarios set in September 1950, and not involving Chinese, so the two scenario packs overlap in subject coverage.

One of the “problems” of representing the Korean War in ASL is that much of the fighting took place at night, while ASL’s Night rules are not very popular among its own players.  MMP chose not to reform or revise its Night Rules for Forgotten War, which does create a certain liability.  Evan Sherry and his Schwerpunkt pals, however, have had it as one of their goals with their Korean War packs to increase the “playability” and “fun factor” for ASLers testing out Korea. Faced with the prospect of filling a scenario pack with actions requiring ASL Night rules, they punted. “This volume of Rally Point is…dedicated to those who prefer Korea in the daylight,” explains Evan Sherry. True to his promise, there is not a single Night scenario in the entire pack.  That ignores, of course, a whole host of Korean War actions–including many Chinese Communist offensive actions–but it does make for a more playable bunch of scenarios.

Another clear intent of the designers (Evan Sherry, Mike Augustine and Hugh Downing) was to seek scenarios of a more playable size than some of those in Forgotten War.  Though there are 4 large scenarios here, 6 of the scenarios are small or medium-sized. Indeed, one of them, RPT164 (Let’s Shoot the S.O.B.’s), is downright tiny, featuring 6 North Korean squads and 3 tanks attacking 4 U.S. squads. It is only 3.5 turns long. Essentially you could play this scenario faster than some other people could set up a scenario.

As mentioned above, Night rules are nowhere to be found here.  Nor are Air Support or OBA–not for a single scenario. Ironically, this product includes no scenarios with the Chinese forces’ main advantage–night–nor any scenarios with the United Nations forces’ main advantages–air support and artillery. This does result in more playable scenarios but it is a bit odd. One scenario, RPT161 (21 Cans of Beer) does use Air Drop rules, but not to drop paratroopers, only supplies. Otherwise, the SSRs are generally short and sweet, doing little more than delineating initial scenario conditions and situations.

Several of the scenarios feature interesting actions. The aforementioned RPT161 (21 Cans of Beers), with its air dropped supplies, includes a very interesting SSR of the type that is quite rare for a Schwerpunkt scenario. In this scenario, which features a North Korean attack on an American position, the Americans suffer from Ammo Shortage and one of their HMGs actually starts the scenario broken. However, if the Americans recover a dropped supply counter, they get to draw from a goodie bag.  Based on a die roll, the Americans may gain -1 DRMs to future CC attacks, the Battle Hardening of a MMC, elimination of Ammo Shortage, -1 drm to SW repairs, -1 drm to Wound Severity drs, or an increase in their ELR.

RPT162 (Armor at Kumch’on) is a rare meaty action with significant armor on both sides. In this scenario, 16 Americans squads, very well armed, and supported by 5 M46 tanks, must attack a North Korean position defended by 13 squads, 2 guns, and 7 T-34/85s (two of which, however, must be dug-in).  In contrast, RPT166 (We Are Friends) is an action featuring a veritable hoard of Chinese (18 4-3-7 squads and 9 4-(1)-7 squads) pitted against a tiny force of 4 American squads and 6 Shermans, with 6 Dutch squads rushing in to help. Here, it’s a question of armor vs. infantry.

RTP164 (Let’s Shoot the S.O.B.’s), whether interesting or not, is quite unusual, in that it is the only DASL scenario published in a Schwerpunkt or Rally Point. According to Mike Augustine, Evan Sherry of Schwerpunkt has said there is unlikely to be another. So smoke ’em while you got ’em.

In addition to the scenarios, Rally Point Volume 17 includes a significant play aid that is likely to be of interest to anybody playing Korean War scenarios featuring the Chinese.  The CPVA Guide is a two-sided play aid on a full sheet of glossy cardstock that details important Chinese-related rules organized by the phases of the sequence of play. So, for example, there is a box for the CPVA Rally Phase that reminds players of such things as the deployment and recombining rules for Recon Units, Early Intervention SW repair rules, effects of CPVA leaders and Political Officers, and so forth. There is even a big box for CPVA Special Night Rules.  The fact that all of these CPVA related issues fill two full pages with relatively tiny type illustrates just how many, many things there are to remember about the CPVA.  This play aid can help players to remember many of these small but key rules.

Rally Point Volume 17 looks like a good addition to ASL’s new Korean sideshow. People who like Forgotten War will certainly want to get this pack–perhaps even just for the CPVA play aid alone. Of course, if the Korean War does not float your ASL boat, this pack is not for you. 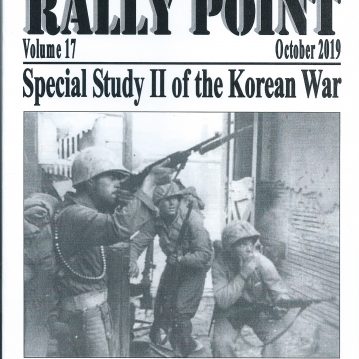