Originally, the third Rally Point scenario pack (RP3) was going to focus on a quite different subject, but playtesting on that project took far longer than expected.  Rather than not release a new Rally Point at ASLOK 2008, Schwerpunkt decided to, as Evan Sherry put it, “search the archives for some of our older, unconventional scenarios that we had previously playtested, but that had not made it into the pages of Schwerpunkt.”  The Schwerpunkt guys dusted them off, finished their playtesting, and printed them.  Thus Rally Point 3 is, in a strange way, a scenario pack of factory seconds from Schwerpunkt.

In contrast to the scenarios released in the issue of Schwerpunkt that appeared at the same time, the scenarios in Rally Point 3 (RP3) tend to be much smaller.  Only 2 scenarios are large; 3 more are medium-sized, while 5 are small (in some cases, quite small).  Most of the scenarios use the standard 1-52 geomorphic mapboard set, but RPT29 (The Sound of Hoofbeats) uses ASLSK map v, while RPT30 (Knocking on the Front Door) uses AP4 maps 53 and 54 (apparently this was not one of the old, dusted off scenarios).

Despite Sherry’s statement that the scenarios are unconventional, most are not all that odd.  Some certainly would be considered unconventional, though.  One scenario that does have an interesting SSR is RPT27 (Sycamore and Succotash), which takes place on Kwajalein Atoll.  The SSR represents a massive Japanese torpedo munitions dump that will explode (equally massively) at some point during the scenario.  RPT21 (Gotterdammerung!) has very unusual VC:  the Germans essentially destroy all of their AFVs (some in certain hexes) and exit 2 vehicular crews off the board.  The novelty aspect of this scenario might prove attractive.  RPT23 (The Bavent Recce) has the Canadians (who are on a patrol) gaining VP for revealing enemy HIP units and entering certain hexes.

In early playing the scenario that seems the most popular is RPT25 (Cornwalls’ Rum Ration), which is a tourney-sized contest between small British and German combined arms forces.

RP3 may not end up being as popular as its predecessors, but it doesn’t seem to be a bad pack, all things considered.  The plethora of fast-playing scenarios is a definite plus, as many of the releases of 2008 had a number of large scenarios in them.

2014 Update:  From the vantage point of 6 years later, one can see that the scenarios of RP3 have seen little play.  The one exception is RPT25 (Cornwalls’ Rum Ration), which did prove to be a popular, balanced scenario.  However, no other scenario in the pack has even a third of the playings as that one and most have far less.  Thus RP3 began a trend which so far has lasted all the way through Rally Point Volume 8, which is that Rally Point scenarios are not getting much play in the ASL world.  Whether because of esoteric themes or other reasons, ASLers are simply not playing Rally Point scenarios anywhere near as much as they play scenarios from Schwerpunkt, the magazine.  It is a curious phenomenon. 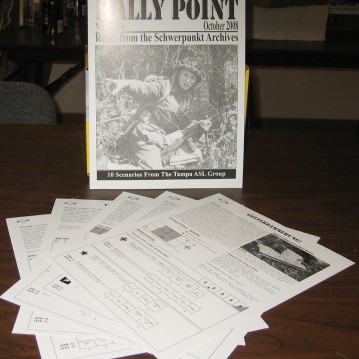