The fifth volume of Rally Point, Schwerpunkt’s series of themed scenario packs, is the Thunderbird Pack (RP5), a collection of scenarios dedicated to the U.S. 45th Infantry Division, a National Guard division (originally composed of units from Arizona, Colorado, Oklahoma, and New Mexico) with one of the longest WW2 resumes.

Oddly enough, this is only the third non-HASL scenario pack for ASL that focuses on an American infantry division (the first being the older Hell on Wheels Battle Pack, by the first iteration of Bounding Fire Productions, which depicted the 2nd Armored Division; the second being Heat of Battle’s Buckeyes!, which depicted actions of the 37th Infantry Division).  It is also only the second time that an outside designer has collaborated with Schwerpunkt on an entire scenario pack (the first being Rally Point, Volume 4:  Ruins of the Reich).  In this case, the designer is veteran ASLer Bill Sisler.  Various delays in the playtesting and development of TBP resulted in the project repeatedly being postponed, but it saw the light of day in 2010.

The 10 scenarios trace the combat history of the 45th Division from its inauguration into combat in Sicily in 1943 through its hard fighting in Italy (including Anzio), southern France (as part of Operation Anvil/Dragoon), and finally deep into Nazi Germany.  It will be interesting to see how much interest the pack creates.  Buckeyes! created only limited interest, largely because the division was a workhorse division rather than an elite unit, and because the division operated in secondary theaters.  The same is essentially true for the 45th Division, so RP5 may not create a lot of immediate gamer lust (though this says nothing about quality).

Of the actions, one is set in Sicily in 1943, three more are set in Italy during its initial slog up the Italian peninsula, one is set on the Anzio beachhead in 1944, another is set in France in January 1945 in the wake of Operation Nordwind, a failed German counteroffensive, and three more are set in Germany in March-April 1945 in the final offensive of the 6th U.S. Army Group.  U.S. Paratroopers and French Maquis make brief guest appearances.

Several of the scenarios feature interesting actions.  RPT42 (Piccolo Peak) features a force of 10 German AFVs accompanied by 8 first-line squads, who can win immediately if they can exit 29 CVP (5 of which must be infantry/riders) off the map.  They are opposed only by 7 2nd line and Green U.S. squads (representing troops from an artillery battalion), three Stuarts, and two 105mm artillery pieces.  That doesn’t sound like much opposition for the Germans, but the problem is that the Germans must cross a river, and there are only a few ways across.  This can result in some tense bottleneck battles.  RPT46 (Ghosts at Meximieux) feature a desperate American/Partisan defense of a town against a concentric German combined arms attack.  The Americans have some French Maquis to help them out, as well as a HIP platoon with bazookas and, to sweeten the deal, a pair of tank destroyers.  On the other hand, the Germans have 6 MK IV tanks and a 150mm self-propelled gun to help their 16 squads take the town.

The largest scenario in the pack is RPT47 (Black Edelweiss), a meaty 3-board 9-turn scenario that depicts a multi-pronged Waffen SS attack against an American hill position.  The scenario features two of the nastiest geomorphic boards–47 and 39 (the third board, the wooded 52, is no slouch, either)–for attackers.  The Germans have 28 Waffen SS squads (6-5-8s and 5-4-8s), loaded with MMG (and a DC), and an 80mm OBA module (plus a one-time 150mm rocket OBA attack).  The defending Americans have 16 elite and (mostly) 1st line squads, also loaded with MMGs (and other toys); they are reinforced by 7 more squads, loaded for bear, and bringing with them a 100mm OBA module of their own.  Both sides are also loaded with good leaders.  This scenario simply features a ton of firepower on both sides.

One toy-filled scenario is RPT48 (Firestorm), featuring a March 1945 American attack against a varied collection of hastily-gathered German defenders.  The Americans have 16 squads, 4 AFVs, a 4 good leaders, a .50 cal HMG, 3 MMG, 3 ’45 BAZ, 2 DC, and, what the heck, a FT.  The Germans, though, to buttress their infantry force (6 4-4-7 Waffen SS squads, 7 4-4-7 2nd line squads, and 3 4-6-7 first line squads), have a 10-2 leader, a hero, a 9-0 Commissar-like Waffen SS officer, an HMG, 2 MMG, 3 LMG, a PSK, three FBL, and a handful of guns and vehicles.  You want more?  Well, the Americans get fighter-bombers with napalm.  That not enough?  Then German sniper attacks can potentially generate Partisan half squads and heroes with MOL capability.

RP5 may or may not generate a ton of interest, but the pack does contain some interesting scenarios and situations, more so than one might think at first glance.

2014 Update:  RP5 did not, as it turned out, generate any interest–the scenarios in the pack have seen few playings in the years since its release.  It may have suffered from the esoteric nature of its subject, as did its predecessor pack, but it should be noted that RP5 is merely part of a trend stretching from the 3rd Rally Point to the present one of Rally Point scenarios getting few playings.  This is a shame as some of the scenarios here are certainly worth trying. 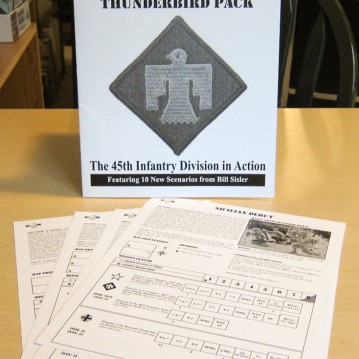