The 6th iteration of Schwerpunkt’s Rally Point series (SP6) revisits the scene of an earlier volume.  All of the scenarios of this volume, as in the 2nd volume, are “dual” scenarios, compatible with both full ASL rules and ASL Starter Kit rules.

In the introduction to the scenario pack, editor Evan Sherry says that player requests caused him to produce another Rally Point volume with the dual ASL/ASLSK theme.  However, he also warns that future ASLSK compatible scenarios will be a low priority for Schwerpunkt in the future.  In part, this is due to the Tampa ASL group’s belief that “SK players should take the training wheels off and play regular ASL if they want more gaming past [ASLSK].”  Sherry argues that there comes a point where the SK product line should reach its limit; in fact, if it had been up to him, ASL Starter Kit #3 would have been the final product in that line.  Many ASLers would agree with this assessment (including this writer), happy with ASLSK as a bridge to ASL, but not crazy about the notion of it being an independent product line of its own, taking up resources that could have been devoted to ASL.

In any case, Rally Points of whatever theme will be more limited in the future.  In the latest issue of Schwerpunkt, Evan Sherry notes that Rally Point will in the future come out every two years rather than every year.  Even though this means fewer scenarios, ASL players should applaud this decision.  It is very easy for an ASL crew of developers and playtesters to get stretched too thin, which can result in imperfectly tested scenarios on the one hand, and playtester burnout on the other hand.  Moreover, the later Rally Point packs have also not had as much playings as the earlier Rally Point packs (even taking time into account), suggesting a bit of market saturation for Schwerpunkt scenarios.  Limiting Rally Points to every other year might well both make it easier on the Tampa crew as well as whet the appetites of ASLers for Rally Points when they do come out.

This particular Rally Point, Volume 6, contains 10 varied scenarios that use the maps and counters available in the current milieu of ASL Starter Kit products (at the time of this writing, essentially Starter Kits 1-3, the Starter Kit “bonus pack”, and ASLSK Expansion set #1).  What this pack offers (as well as the first ASLSK Rally Point pack) for ASLSK players that almost none of the “official” products do is the ability to combine the components of the different products.  Except for the “bonus” mini-pack, all of the ASLSK products released so far have been stand-alone, meaning they use only their own components.  So no product from ASLSK#2 uses boards from ASLSK#1, for example.  This pack allows those sorts of combinations.

It does not appear that the scenarios were actually playtested specifically for ASLSK.  Rather, the playtesting seems to have been done for ASL.  However, the rules are compatible with ASLSK.  Schwerpunkt accomplishes this by including ASL-only rules in italics, so that each scenario may be played either as an ASLSK scenario or an ASL scenario.  These sorts of scenarios make the perfect sort of bridge to full ASL; moreover, once someone makes the jump to full ASL, the old scenarios are not “wasted”–they can still play them in full ASL.  It is somewhat inexplicable why MMP has not done the same.

The scenarios are a good, even mix of small, medium and large-sized actions.  No scenarios have OBA, Night Rules or Air Support.  In looking at the SSRs, it is interesting to note a difference in design philosophy between Schwerpunkt-designed ASLSK compatible scenarios and MMP ASLSK scenarios.  With one minor exception, the Schwerpunkt scenarios simply subtract SSRs from the full ASL version in order to make them ASLSK compatible.  Thus Schwerpunkt basically does not try to represent ASL concepts within the context of ASLSK SSRs.  In contrast, MMP is far more open to creating simplified versions of different ASL rules (such as OBA, for example) for its ASLSK scenarios, in the form of SSRs.

Most of the scenarios in this pack are straight-forward, bread and butter scenarios (this is not a criticism).   Many of them contain the pseudo-building “control” VC that have become frequent in Schwerpunkt scenarios, where the attacker is not actually required to control buildings to win, but merely to eliminate enemy Good Order units from them.

Among the scenarios, several look interesting.  RPT53 (Tiger Blood), despite its dubious Charlie Sheen reference, pits a force of attacking Americans, mostly elite and accompanied by a bunch of Shermans, against a smaller and less able defending force, buttressed by two fearsome weapons:  a King Tiger and an 88mm Flak gun.  The Americans must clear the Germans (see above para) from a key building and from a hill; these are on two separate maps, so the Americans at the outset have an interesting decision.  They must divide their forces, taking into account that the forces that accomplish their objective first may have only a limited ability to contribute to the end game.  They also have to contend with two weapons that can easily eliminate every one of their tanks (except that the 88mm gun could have problems against the frontal armor of the Sherman “Jumbo”).  However, with all of their tanks (including a 105mm Sherman), their 1945 Bazookas and 1945 60mm mortars, the Americans have an unbelievable amount of smoke, in various forms, to help them.

RPT54 (An Italian Civil War) uses Soviet and Italian counters to represent contending Italians in the Spanish Civil War (an Italian International Brigade supporting the Republicans and an Italian Fascist unit supporting the Nationalists).  Both sides have some tin cans to help them; it’s a straightforward early war battle.  RPT55 (Coudehard Cache), in contrast, features late war AFVs, including Panthers and Tigers.  This scenario depicts a group of Germans trying to escape from the Falaise pocket, attempting to overrun units from the Polish Armoured Division in place to stop them.  The scenario offers the Germans two ways to win.  They can win immediately if they can exit 4 of their 6 AFVs off the board.  They can win at the end of the game by clearing Polish units from two different parts of the playing area.  With just 4.5 turns, the action will be fast and furious, with the prospect of immediate victory conditions adding an extra bit of tension.

In RPT58 (Sikh Defiance), Indian and German troops contend in a “king of the hill” situation, with both sides feeding reinforcements into the fray.   One of the smaller scenarios is the all-infantry RPT51 (Arrivederci Nembo), in which 11 Italian squads (well-led) must attempt to get past a 6-squad force of Canadians (also well led) and exit 8 VP off the map.

One of the larger scenarios is RPT59 (Hungarian Hopscotch), interesting despite the bad title.  What makes this city fight scenario interesting is that either side may potentially win at the end of any game turn.  The Germans and Soviets each have troops at each other’s doorsteps, and each have a reinforcing group a bit farther away.  Either player may win at the end of a game (not player) turn if they control six or more multi-location buildings in the center of the map area (otherwise, the Soviets win if they control at least 5 at the end of the game).  As a result, each turn could potentially see a desperate struggle for one or more key buildings.  It is an interesting way to build intensity into a scenario.

Overall, the pack looks like a very interesting one, and one doesn’t have to be interested in the Starter Kit in order to enjoy the scenarios herein.  It looks worth getting. 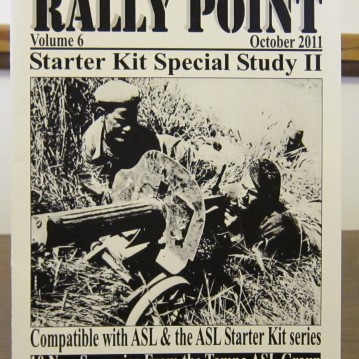