Contents:
10 scenarios on cardstock, one page of scenario notes

Rally Point Volume 9 (RP9) is the latest of Schwerpunkt’s line of themed scenario packs, though sometimes the themes are quite loose.  This volume is itself an example; the theme is explained in the product’s subtitle:  “A Special Study of ASL Mapboards 7a/b, 8a/b and 9a/b,” a title that could only be made less catchy by the inclusion within of differential equations.  Essentially what this pack consists of are scenarios that use the geoboards contained in Action Pack #9: To the Bridge!  The working title for the pack was the “Anything But Burma” pack, as the scenarios of Action Pack #9 concentrated on Burma.

The scenario mix strongly tends towards the small; only a few of the scenarios in the pack are medium or large in size.  No scenarios use Night, or Air Support rules; one scenario uses OBA.  Generally speaking, these scenarios should mostly play “fast and furious.”  Obviously, boards 7a/b, 8a/b, and 9a/b are used in this pack.  Seven of the 10 scenarios take place on a single one of these maps–or just half of one of them; these scenarios are not simply small in the number of units, but also small in the area of action.   Boards 10 and 34 are the only other geoboards used in any of the scenarios (once each), so purchasers had better like the three AP9 boards, because they won’t see much else.

Some of the scenarios could use some clarification, especially RPT85 (Choiseul Few) and RPT86 (No Quarter Requested), both of which use non-standard units as partisans.  RPT85 depicts a Japanese attack on some USMC paramarines.  The Marines have two 1-4-9s in their OB, along with an SSR that says “The 1-4-9s in the Marine OB are Partisans.”  However, the SSR doesn’t explain whether or not they are Partisan Heroes or simply Partisan SMCs.  RPT86 features some early war U.S. 3-3-6 squads as Filipino partisans.  However, the SSRs do not make clear whether these units should be treated as such units would normally be treated (i.e., lax and/or inexperienced), but with partisan capabilities and limitations, too, or whether they are considered stealthy and/or experienced.  Clarifications from Schwerpunkt at ASLOK suggested the latter is actually the case.  No Quarter Requested is mostly a fun scenario, but marred by the inclusion of a Filipino HIP unit that can pop out in the end game to claim a victory area.

RPT87 (Kool Running) is moderately interesting; it is a “get those guns” action pitting an elite American combined arms force against an Italo-German (mostly the former) force defending two 50L AT guns and a dreaded 88mm AA gun.  The Italians get 2 DCs and a hero, which one does not often see.

RPT89 (Something Borrowed) is more novel:  it is an East Front scenario that depicts a Soviet attack featuring Lend-Lease Matildas and Valentines.  The Germans also get some “something borrowed,” in that they have 4 captured Soviet tanks at their disposal, plus a Soviet AT gun.  It is probably the most interesting scenario in the pack.

RPT90 is a “classic” East Front situation in that it features a tiny German force, aided by 3 Panthers, trying to stave off a much larger Soviet force (including two Lend Lease Shermans).

Rally Point Volume 9 is not as strong as Schwerpunkt Volume 20, which came out at the same time, but still has some interesting possibilities. 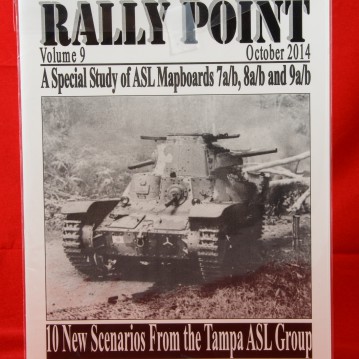