Contents:
60-page magazine, including 20 scenarios as pages of the magazine

The third issue of Heat of Battle’s ASL magazine, Recon by Fire (RbF3) is billed as a “special edition” because, unlike its two predecessors, all of its scenarios are centered on a common theme, “Axis Minors at War,” because Armies of Oblivion, which provided the full Axis Minor counterset, was finally available after years of delay.

If the previous issue was all about Chas Smith, the third issue is all about Steven Swann, the prolific scenario designer who wrote many of the articles in this issue and designed 15 of its 20 scenarios.  Swann, who was one of the persons who had done historical research for Armies of Oblivion, years earlier, had used the many-year delay of the module’s release to design a host of Axis Minor-related scenarios.  Indeed, most of his scenarios appearing in RbF3 were originally going to form a themed scenario pack centered around the 1st Romanian Armored Division.

Swann also contributed historical articles on Bulgarian armor, Hungarian paratroopers, and on Romanian and Hungarian armed forces, respectively.  Many will consider them informative and interesting, while others might wish for more gameplay-related, rather than historical, articles.  Seven of the articles in RbF3, though, are analyses of scenarios that appeared in this issue or in Armies of Oblivion; they are useful and interesting.  The issue also includes a review by Chas Smith of Armies of Oblivion, although perhaps calling it a “first impressions” might be more accurate, as the article does not indicate that any scenarios had yet been played by the author at the time of its writing.  Smith criticizes MMP because 8 of the 11 scenarios in Armies of Oblivion were created by one designer–a somewhat interesting criticism in light of the designer balances in RbF2 and RbF3.

Of the wealth of scenarios in RbF3, one, RbF-34 (Bloody Hill) uses one of the HOB geomorphic mapboards found in High Ground!; the others all use standard geomorphic mapboards (no DASL).  Most follow the now standard Heat of Battle routine of including crews to use with MMG, HMG, and MTRs (an example of a “grudge rule;” Steve Swann does not like the fact that ASL rules allow regular infantry squads to man those weapons).  One scenario is all armor.  Six of the scenarios use “simultaneous setup,” where a board is placed upright down the center of the map area so that players can set up their units not knowing how the other player is setting up; some ASLers dislike this type of setup because, since the defender cannot see half the mapboard, it is often difficult for the defender to set up a defense that protects all approach paths (it also makes it very valuable to have played the scenario previously).

One of the most common criticisms of Armies of Oblivion was that most of the scenarios in that module were quite large, with few options for tournament play or for a simple afternoon or evening-long scenario.  As a result, many ASLers were looking to third party publishers to design small and medium sized scenarios using the Axis Minor forces.  Unfortunately, the scenarios in RbF3 replicate, if not exacerbate, the exact same problem.  Of the 20 scenarios, only one (the all-armor scenario) can be considered smallish (5 tanks vs. 12 tanks) and only 4 medium-sized; the remaining 15 scenarios are all large.

It is unfortunate that there was not a more balanced mix of scenario sizes in RbF#3, because many people will simply not have the time or patience to play such massive scenarios.  The scenario mix renders RbF3 somewhat disappointing.  Since its release, most of the scenarios have received little play, with the result that none stand out for recommendation. 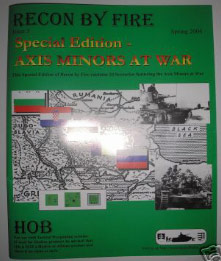