Contents:
48-page magazine, including 8 scenarios as pages of the magazine

In 1999, Heat of Battle, having established themselves with historical modules and scenario packs, took the next logical step and started Recon by Fire (RbF), an ASL-related magazine emulating similar efforts such as the ASL Annual, Critical Hit Magazine, Tactiques, ASL News, and Backblast in consisting of a mix of articles and new scenarios.  It was a welcome addition to the ASL publishing scene.

Following the release of the first issue, however, for years ASLers waited and waited, but no second issue ever emerged.  Many people assumed that Heat of Battle had considered it a failed experiment, not to be repeated.  However, in 2004 RbF rose, phoenix-like, from the ashes, with an Issue #2 following only half a decade after the first.  But it would last for a total of four issues only.

RbF #1 was black and white, with red spot coloring for the scenario pages and the cover.

The article content of the first RbF was a mix of both decent and mediocre.  Thematically, it focused on Blood Reef Tarawa, the MMP version of which had recently been released.  It included two brief vignettes of individuals who fought on Tarawa, a description of VASL (obviously dated now), a description of how Steve Dethlefsen as a USMC lieutenant in Operation Desert Storm used ASL to run wargame simulations of a planned attack by his regiment, a historical justification for the victory conditions in Blood Reef Tarawa’s CGII and III, an article by Matt Shostak on building an ASL club, an AAR by Rob Seulowitz of a recent World Boardgaming Championships convention, and an article by Eddie Zeman and Steven Swann on Marine firepower in ASL.

More interesting was a series replay of a Red Barricades campaign game, a “Crossfire” scenario analysis of Scenario 35 (Blazin’ Chariots) by Rob Banozik and Rich Summers, and an article by Matt Romey on the tactics of crossing open ground.

The 8 scenarios are a mix of medium-sized actions from all theaters, with no real standouts.  For whatever reason, they have received little recorded play in the last 15 years (often the fate of third party products).

One of the scenarios, RbF1-3 (South Park), uses the Cheneux map from Kampfgruppe Peiper II; another, RbF1-7 (Into the Cauldron), is a DASL scenario.  RbF1-7 (Desert Fortress) is a desert scenario.

The scenario card artwork makes reading some of the 1/2″ counters somewhat difficult.  Nevertheless, it is worth getting if you can get it for a reasonable price. 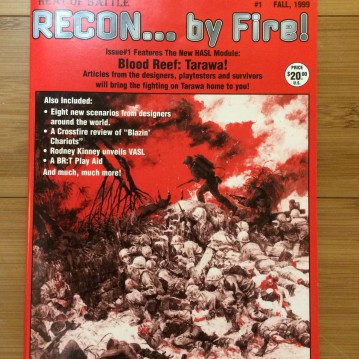