The Red Chinese die is a standalone 1/2″ (12.5mm) custom precision die in Battleschool’s “Nationals” line of nationality-based dice.  It is the first such standalone die, as all previous products in the series consisted of packs of 5 different dice.

The “Nationals” dice are white with a symbol or emblem where the 1-pip would normally be.  In this case, the symbol is a Chinese character for “August 1,” the date in 1927 that the Communist Nanchang Uprising began (which the Communists would later commemorate as the date that the People’s Liberation Army ostensibly began as well).  At least as early as the 1950s, this symbol, inside a yellow-bordered red star, would be the PLA’s main insignia.  This writer is not sure if that emblem was actually used earlier, though.  Certainly the standard “Mao” cap had a single red star on it, as did many Communist forces at this time.

Given the extremely few scenarios in ASL depicting the Communist Chinese, this die is mainly for completists. 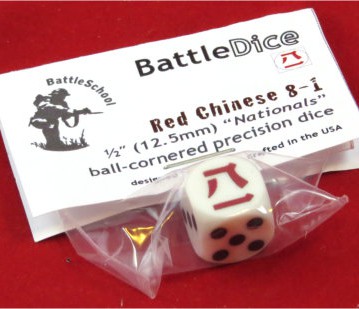