Red Christmas, designed by Andrea Garello for ATS and ported over to ASL rules by Dave Lamb, is the second of a planned three modules depicting Italian troops in the Soviet Union defending against the 1941 Soviet Winter Offensive. This module contains two maps depicting the fighting around two nearby villages, the too-similarly named Orlovo Ivanovka and Novo Orlovka.

Scenarios involving Italians are still too rare in ASL, though 2007-2008 did see the release of several Italian-themed products as well as a number of scenario packs containing scenarios featuring Italians. As a result, the theme of this small historical module, featuring Italian troops in the Soviet Union, contains some novelty value.

The Novo Orlovka map, still sporting its “Advanced Tobruk System” logo, depicts a very small playing area (only 11 hexes by 12 hexes) that almost seems like a spattering of random terrain: two small hills, clumps of woods, a gull, clumps of brush, and 6 scattered buildings. The map uses very large hexes, which actually become a liablity, as they make the folded map taller than the scenario cards that provide the only protection for the components of this module (contained in a baggie). Because of this, the top of the Novo Orlovka map can be easily damaged by handling the Red Christmas product. Owners may want to insert their own piece of cardboard backing into the baggie to provide protection and to avoid damage. Two scenarios use this map.

The Orlovo Ivanovka map (twice the number of hexes as the Novo Orlovka map) depicts a more interesting terrain situation. The map is dominated by a Level 3 hill, with a stream flanking it on one side and a small village with wooden buildings on the other. Four scenarios use this map.

Most of the counters provided are Italian infantry counters, and most of these duplicate existing counters. However, there is a new elite squad type provided, a 4-4-8 elite squad designed to represent Alpini infantry, Italy’s excellent mountain troops. While the 8 morale given to the Alpini on these counters is definitely more historically accurate than the 7 morale of “official” elite Italian squads, their inclusion in this product is a bit peculiar in that no Alpini fought in any of the actions depicted here (the Alpini Corps would not arrive on the Eastern Front until 1942), so essentially these counters too are unnecessary. Other counters include a smattering of German, Soviet and Italian guns and AFVs appearing in the scenarios, as well as several “historical” aircraft counters. There is also a counter for a Field Kitchen, and a couple of rows of random leader counters that seem to be left-over “vanity” counters printed by CH.

The quality of Critical Hit counters of this era is still a matter of debate, as they have both strengths and weaknesses. The main strength is basically more use of color on the SMC/MMC counter artwork. The artwork of the figures on the infantry counters, however, often still features awkward poses and is often inferior to that of most “official” artwork, despite the better use of color. The values on the infantry counters are still too small and too close together; the counters could make better use of the available space. But it is the gun (and some SW) and vehicle counters that are still the most problematic, as Critical Hit, despite many complaints, has persisted in using a confusing and non-intuitive counter layout which renders them more or less useless without a play aid to act as a Rosetta Stone for players. It is far past the time they started to use alternative artwork in the spirit of Heat of Battle, which manages to avoid duplicating the “look and feel” of official ASL counters without making things more difficult for players.

The six scenarios of Red Christmas (irritatingly split up randomly among 4 scenario cards) are fairly rules intensive, all having 5-7 SSR, some of them complicated. Two scenarios are Night scenarios, three scenarios feature OBA (including one with THREE Soviet modules and one Italian module), and two scenarios have Air Support. Half of the scenarios are largish, while the other half are small or medium-sized. The scenario with the most interesting tactical situation appears to be RC5 (Avanti Savoia!).

Essentially, this is a module for experienced ASLers. The complicated SSR, combined with the frequency with which complex rules such as night, OBA and Air Support appear, make them less suitable or attractive to novice players. Even some of those players may be a bit turned off by a couple of the scenarios that force players to take certain actions with their units. On the other hand, only this module and its predecessor treat this battle at all in ASL terms. Certainly the module is something that people with an interest in Italian-themed subjects should take a look at.

2nd Edition (i.e., Red Christmas II) Comments: The original Red Christmas was part of a planned series of small historical modules featuring Italians on the Eastern Front. Like most Critical Hit “series,” this series seems to have been abandoned part-way through. Other than the increased price, the main difference between the original Red Christmas and this new edition are the maps. First, the artwork on the maps has changed. The original, fairly drab, artwork has been replaced with new “winterized” artwork depicting snow-covered terrain. This winterized artwork is pretty decent, though it is not as good as that appearing in, for example, LFT’s Kampfgruppe Scherer: The Shield of Cholm. It does, at least, provide players with more of a feeling that they are actually fighting in the snow than green-covered maps do. The Orlovo Ivanovka map looks pretty nice.

Both Red Christmas maps also feature physical changes from the original. For one thing, they are printed on light cardstock rather than paper. One map, the Novo Orlovka map, appears to have been slightly shrunk; as the hexes are still very generous, this is not a problem. However, Critical Hit did not bother to cut the map to the right size, so in addition to the deliberate gray border around the map there is a second, larger white border that should have been cut off. The other map, Orlovo Ivanovka map, has a more drastic change to it. CH did not pay to have the map folded in half. It is one large, flat 12″ x 18″ map, which makes it much larger and more awkward to store than any other official or unofficial ASL products–unless the user folds it himself. Players should be warned that, unfolded, this map is susceptible to being bent. Moreover, the use of this nonfolded map also apparently necessitated Critical Hit abandoning a ziplock bag for storage, simply encasing it in shrinkwrap instead. This means that, after opening the product, ASLers will not be able to store the product in its original packaging unless they carefully cut a slit open in the shrinkwrap to preserve it. Critical Hit clearly needed to fold the map.

The other major change is in the counters provided. The first edition had counters that were essentially gratuitous, including 5/8″ Gun/AFV counters rendered in Critical Hit’s old and essentially unfathomable style. Red Christmas II provides two new countersheets with Italian troops. They are also gratuitous counters (i.e., with the exception of a single “Field Kitchen” counter, they appear to be duplicates of already existing counters), but at least the counter layout is much better and more understandable. 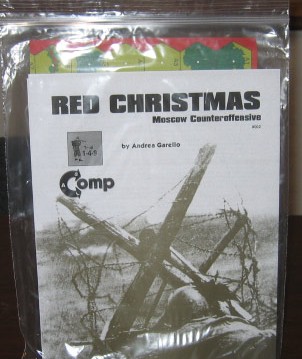