Retro ASL, designed by Gary Graber of Minden Games, is an alternative, ostensibly simpler way to play ASL.  It was originally published in the first four issues (#1, Summer 1998; #2, Spring 1999; #3, Fall 1999; #4, Summer 2000) of Minden Games’ magazine Panzerschreck.  Subsequently it was published as a stand-alone booklet.

The idea behind Retro ASL, as explained by its designer, was “to provide occasional players with easy and straight-forward rules that will allow them to use the game system’s components and system modules to experience the ‘feel’ and fun of ASL without having to implement hundreds of pages of rules.”  The extent to which Retro ASL actually duplicates the “feel” of ASL is debatable, because aspects of the Retro ASL rules are radically different.  For example, Retro ASL eliminates morale checks (the Retro IFT will automatically break all units of a certain morale, or eliminate units already broken).  Retro ASL’s armor rules eliminates the To Hit DRs; instead, there is only a To Kill number.  Retro ASL also introduces a major new concept to ASL:  “hesitation.”  During the course of movement, units may “hesitate” (i.e., stop) if moving in the open and in range of an enemy unit.

The Retro ASL rulebook also contains Design Your Own information and a half-dozen scenarios.  Only 17 pages of the rulebook cover the Retro ASL rules; the remainder consists of DYO charts and scenarios.  The 2nd Edition of Retro ASL was published primarily as a result of the Copyright Wars.  Retitled simply Retro, to remove any references to ASL, it does add some optional rules, a section of “National Armor Listings,” and some improved graphics.

Retro ASL has a high rating on Boardgamegeek from the relatively few players who have tried it, but most people who want a simpler ASL experience that captures its feel may be more happy with the various ASL Starter Kits.

Third Edition Commentary:  In 2009, Minden Games released a third edition of Retro, its variant rules system for Advanced Squad Leader (it claims it can be used with other tactical systems, but it cannot).  Retro consists primarily of a small, 52-page rules booklet that is designed “to provide players –experienced and inexperienced alike–with simple rules so that they may play with the various components and modules without having to immerse themselves in hundreds of pages of rules or overly extended play time.”  It cautions that “Retro is certainly not for the gamer who thinks “more is better” when it comes to chrome and realism, but is mainly for those who believe that “less is acceptable” and, at times, even preferable.”

Retro is, in many ways, the most perplexing third party product ever released for ASL.  Although its rationale for existence is to provide a simplified way to play ASL, it is in fact not necessarily all that simple.  More importantly, it fundamentally changes the nature of the game so that what one ends up playing is not a simplified ASL but in many ways an entirely different game.  Moreover, in the years since the 2nd Edition of Retro was released, MMP published the three ASL Starter Kit modules, which are a far better and far more compatible way to simplify ASL, so the reason for publishing a 3rd Edition of Retro in 2009 is simply inexplicable.  It is in many ways a game system without an audience.

Moreover, Retro rips out the heart of the ASL game system.  The designer, Gary Minden, explains it this way:

At the college where I previously worked, a colleague and I would set up and play various wargames in a corner of my office…over lunch.  Games were left set up if not completed, with moves done in between classes or when time allowed.  In typical “I go/you go” games, the opponent did not have to be there when a move was done…Well, we wanted to play Advanced Squad Leader this way, but needless to say it took some “simplification” to pull it off.  Taking the earlier suggestion to “remove everything but squads, crews, leaders, and machine guns” seriously, and crafting the sequence of play into discreet, non-interactive turns, took some doing, but this is the result…Yes, the “I go/you go” sequence of play gives one more the feeling of Panzerblitz…than Squad Leader at times.  But, on the other hand, Retro does play quickly.”

Given that the most important part of ASL is its highly interactive nature, one quickly realizes that playing Retro would be nothing like playing ASL.

The sequence of play in Retro is for Player A to conduct a rally phase, movement phase, fire phase, defensive fire phase, and close combat phase, and then for Player B to do the same.  Routing takes place immediately when a unit is broken.  Defensive fire is automatic/mandatory if an enemy unit is within three hexes (it is not clear in the rules if Defensive Fire is allowed beyond three hexes).  The Advance Phase is combined into the CC phase.  There’s no residual firepower, fire lanes, advancing fire, spraying fire, assault fire, or much else.

The combat system of ASL is also scrapped.  For AFVs, there is a new jerry-rigged system that eliminates the “to hit” process, so that one DR will determine if a vehicle affects a target (the only possible result is “elimination”).  For infantry, there is a new IFT, which has the following results:  KIA (all are eliminated), # Morale “checks” (all personnel with a morale of that # or lower are automatically broken), and no effect.  Some results may also have an “ELR check.”  Hilariously, the system provides an optional IIFT as well.

In addition to the wholesale changes in the rules, there are additional small changes that seem to exist for no reason other than that the designer wanted to put them in.  For example, all MG break on a DR of 12, repair on a dr of 1 and are eliminated on a dr of 6.  It is not one bit more complicated to simply follow the instructions on the counter for breakdown and repair, but the original system was thrown out.  Similarly, LMG are allowed in Close Combat, a throwback to the original SL rules.  Why?  It appears that the designer liked it.

Six scenarios are provided with the rules, all of which are generic combat situations reminiscent of those in SASL:  Counterattack, Escape, Patrols, Jungle Advance, Armor Advance, Desert Swirl, Urban Assault, and Last Stand.  These “scenarios” include rules like “Mutually agree on a board to use.    If no agreement, use board 17.”  There is also a DYO system, of sorts.

The rules are not rigorously written out, nor are their effects examined, so rules issues will appear constantly if this system is tried.  The designer suggests people just roll a die to resolve them.

It is just hard to imagine who might play Retro.  People who actually enjoy ASL–which is, after all, the most popular traditional board wargame in the world–would never try it.  People wanting a simpler version of ASL would be far better off with the ASLSK.  And most of the few people who want “variant” rules systems for ASL typically do so because of their own personal likes and dislikes about the system and tend to want to come up with their own homebrew rules rather than use those customized to someone else’s tastes.  Retro is not very good as a rules system, but even forgetting that fact, who is this for?  In 2009, it’s just hard to imagine who might even want to try it.

4th Edition Commentary:  In 2012, Minden Games released a 4th edition of its “Retro” rulebook, suggesting somebody out there must be buying this ASL variant somewhere.   Although the rulebook is shorter, it states that “this 4th edition contains no substantial changes to the 3rd edition rules published in 2009.”  It is really more of a reprint than a true new edition.

5th Edition Notes:  Well, someone must be buying this product, which most ASLers don’t even know exists, because Minden Games released a 5th Edition of it in 2016. The 5th Edition expands the rulebook to 56 pages (including 11 scenarios), with “more optional rules,” including rules for fires, minefields, a “hesitation option,” air drops, captured SW, and national troop characteristics. Minden Games used Amazon’s self-publishing platform Createspace to produce it in “soft cover book format.”

2020 Notes:  In early 2020, Minden Games made available–only for separate purchase–a “Retro Reference Pack” that contains “all the main Retro tables for handy reference (six cards in all), a sheet of uncut markers on cardstock, and two new scenarios. 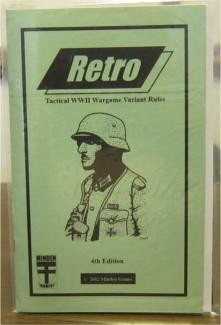