It is hard to interpret the introduction of the “Retro Pak” series by Critical Hit as anything other than a cynical attempt to recycle previously released material.  This bare-boned pack contains a mere 8 scenarios, which all seem to be from the On All Fronts newsletter and previously printed as Critical Hit scenarios, some more than once.  However, the scenarios in the pack are not straight reprints, nor reprints that have balance or other errata included.  Rather, the scenarios tweak the orders of battle, replace some older geomorphic boards with newer ones (for no discernible reason other than to make them more different), and add heroes to the orders of battle.

For example, RetroPak #7 (The Road to Berlin) began as OAF 9 (Hell’s Fire at Meuncheberg [sic]), a scenario originally printed in the ancient ASL newsletter On All Fronts, then reprinted some years later by Critical Hit with some other OAF scenarios as “OAF Pack.”  In Retro Pak I, the scenario reappears as The Road to Berlin.  The historical text is the same (although, ironically, its changes do not even include fixing the misspelled “Meuncheberg” from the original), and the order of battle is arbitrarily tweaked.  For example, a Soviet force of 9 4-5-8 squads and 3 6-2-8 squads is now a force of 8 4-5-8s, 2 6-2-8s, and 4 4-4-7s.  It originally had 1 .50 cal MG and 3 LMG; now it has 2 MMG and 3 LMG.  And so on and so forth.  The original scenario appeared to have favored the German (with a 2-8 ROAR report), but the Germans are strengthened in the new version, which raises questions about balance, although of course since the boards were arbitrarily changed, the new version will play differently.  No playtesters are listed, so it is not clear if any of these revised reprints were even playtested.

The bottom line is that it is hard to recommend this scenario pack to anyone.  Veteran ASLers stand a good chance of already owning the original versions of these scenarios–scenarios that appeared as their designers intended, without maps, orders of battle, and SSRs arbitrarily changed.  And because the amount of playtesting, if any at all, on these “new” scenarios is unclear (or rather, it seems pretty likely there was none), it is hard to recommend this pack to new ASLers, either.  That pretty much leaves completist collectors only, and masochists. 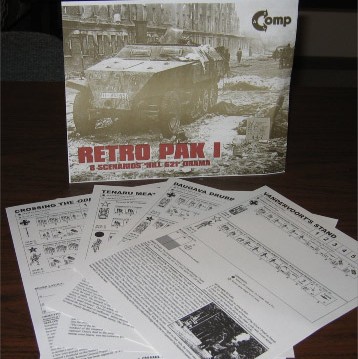