Retropak II (RP2) is the second of what is apparently a series of Critical Hit reprint scenario packs, taking old scenarios from various unattributed sources and renaming, reglossing, and recombining them in new scenario packs.  Retropak I debuted in 2008 to little notice; two years later, Retropak is back with a sequel.

This time around, 10 scenarios are included.  Most of them are not Critical Hit originals, but rather obtained from other third party publishers (who published them in the mid-1990s) and originally reprinted by Critical Hit during the period 1996-1998.  Because most of these re-reprinted scenarios in RP2 have been renamed, their origins are not immediately obvious.  However, research reveals that most of the scenarios are from the European 1990s-era ASL newsletter ASL News (the rights to which Critical Hit later acquired) and were originally reprinted by Critical Hit in a compilation called Scroungin’ ASL News.

Below is a list of the Retropak II scenarios and their provenance, along with how the scenarios were changed.  Note that essentially the only meaningful changes were minor OB variations (although Blade Force had a more serious set of OB changes).  Rules and victory conditions were reworded in most of the scenarios to make them more clear, but their meaning was not changed.  In summary, then, there are few significant changes from the originals.  This pack is essentially a reprint of reprints.

Though all of these scenarios are out of print, many of them are still relatively available.  Critical Hit scenario packs such as Rout Pack 1 and Scroungin’ ASL News can be found without too much trouble (or expense) on the secondary market.   Not too much more difficult to obtain is the 1997 Special Edition issue of Critical Hit Magazine.  And Prussian Panic can be downloaded for free from the Web.  That basically leaves one scenario, Forward Defense, which is legitimately hard to find.

Of the scenarios, only one, Victoria Cross, has gotten a fair amount of play over the years.  Most of the others have been languishing in obscurity, justly or unjustly.  The cosmetic changes and different names are not likely to make them any better or more enjoyable (or less so).  Veteran ASLers will probably already have a number of them in their possession; there is little need to purchase new versions.  That leaves relatively new ASL players as the possible target audience for this product.  The inexpensive price of Retropak II means that some older, not well known scenarios can be purchased cheaply. 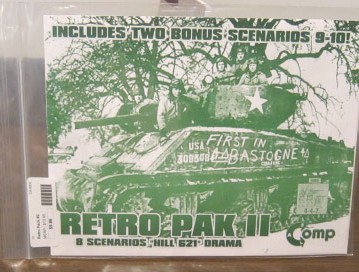