Home > Products > Rivers to the Reich

Rivers to the Reich (RttR) is a scenario pack that finishes the conversion to ASL of all of the official scenarios originally designed for the Squad Leader series of modules, a process that has taken over 20 years (see chart below).  It is the third and last in a trilogy of packs, following A GI’s Dozen and Turning the Tide, designed to complete the conversions.  As was the case with Turning the Tide (and possibly A GI’s Dozen), the RttR scenario conversions were done by Jim Stahler.

ASL is a game to which one tends to be loyal, and many ASL players today originally cut their teeth on Squad Leader in the late 1970s and early 1980s and have numerous fond memories of playing the original scenarios.  Thus there is a certain nostalgia effect going on with these scenarios, a desire to have new and playable versions of these old “chestnuts.”  Then, too, ASL is a game about which one tends to be compulsive or anal retentive, or both, and the fact that there still remained unconverted SL scenarios lying around must have nagged at the backs of the minds of many an ASLer.  Consequently, an audience developed for these ancient scenarios.

If the scenarios are long in length, they are also big in size.  Eight of the scenarios use 3 or more geomorphic mapboards.  In terms of units involved, 8 of the 15 scenarios are large in size.  There are 6 small or very small scenarios and one medium-sized scenario (this lack of a middle is also apparent in turn lengths; there are no scenarios with 7, 8, or 9 turns in RttR).  The scenarios are also OBA-heavy, with OBA appearing in almost half of the actions.  One action uses night rules.  Three scenarios–U34 (The Dornot Watermark), U36 (Operation Switchback), U37 (Scheldt Fortress South), U38 (Clearing the Breskins Pocket), U43 (The Roer Bridgehead)–involve some sort of river crossing with boats or amphibious vehicles.  Another scenario, U45 (Bridgehead on the Rhine) has Duplex Drive Shermans as reinforcements.  One scenario, U44 (Operation Varsity) is an Air Drop scenario.

Thus most of the scenarios in RttR tend to be large and long.  The exceptions seem to gravitate to the other extreme.  U39 (The Clearing), for example, is a 6-turn scenario pitting 6 American squads against 3 German squads and a gun.  U42 (Stand Fast) features 5 American squads attacking only 2 German squads.  Such micro-scenarios are too small for the tastes of most ASLers.  There are only a handful of moderate or “tournament” sized actions in the pack.  These include U35 (Semper Paratus), U40 (Vitality I), U41 (Infatuate II), U44 (Operation Varsity), and U48 (The Ragtag Circus).

The conversions tend to use the boards from the original four modules (1-8, 12-15) and the so-called “rogue boards” (9-11; these boards were originally issued separately because of the low quality artwork on them–later the boards were re-done for ASL with better artwork).  However, two ASL-only boards (40, 23) made their way into a couple of the conversions, primarily because they contained board-length water obstacles.

RttR also comes with new versions of the overlays that originally appeared with GI: Anvil of Victory.  They are used in a number of the scenarios in RttR.  RttR also comes with a chart that shows other converted scenarios that originally used these overlays, so that crazy players who wanted to could use them with those scenarios.  Veteran SLers will remember that these overlays are not cut out like standard ASL overlays but rather are mostly cut out along the hexgrids.

Collectors seeking all of the official SL/CoI/CoD/GI:AoV conversions need the following products (or see list with full scenario names and information): 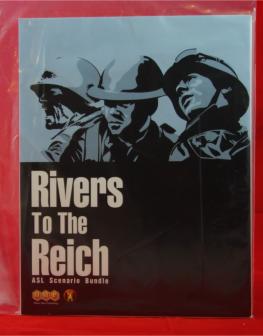