Roman Glory is a modest ASL release from Critical Hit, ported over from an ATS version (designed by Andrea Garello) by Dave Lamb and his crew of Detroit area ASLers.  With no counters, only four scenarios, and a small (supposedly historical) map, it does not have too much to offer other than the novelty of Italians on the East Front, a novelty that would be eclipsed by the release of the official ASL Action Pack #3, Few Returned, by MMP, which also featured Italians on the East Front.  However, the actions depicted by Roman Glory are different from those depicted in Few Returned.  Roman Glory portrays one of several (essentially unsuccessful) late 1941 Soviet counterattacks against the Italian Expeditionary Corps (CSIR), whereas Few Returned features the attempted Italian breakout from encirclement during Operation Little Saturn in late 1942 and early 1943.  Roman Glory was also sold at a very modest price, making its small size much more reasonable.  Its packaging proclaims it as first of a series of such modules depicting the Italian Army on the Eastern Front.

One of the four scenarios in Roman Glory is large; the others are medium-sized.  Three of them use the entire map, while the fourth uses half a map.  Three feature Italian attacks while one depicts a Soviet attack.   One scenario employs a Creeping Barrage, another uses Night Rules, and a third uses OBA and Air Support.  The fourth uses no unusual special rules.  Three of the four scenarios use some sort of random force selection to determine the OBs of one or both sides, which adds some interest and replayability.  Of the scenarios, RG1 (Colonna Chiaramonti) is probably the simplest to play.

2nd Edition Comments:  The original Roman Glory was a mini-HASL module that had two appeals:  1) the novelty value of Italians on the Eastern Front and 2) a low price (around $15.00).  The 2nd Edition of Roman Glory, released six years later, has essentially the same components but is almost three times the price at $39.95, making it considerably less than a bargain.  The differences between the two editions in no way seem to make up for the huge price difference.  The major difference is the map, which has new “winterized” artwork and is slightly larger (and printed on light cardstock rather than paper).  The original artwork was certainly nothing to write home about, so some players might appreciate the novelty value of a snow-covered map.  However, though CH’s winterized map artwork is not bad, it is not as good as that appearing in, for example, LFT’s Kampfgruppe Scherer:  The Shield of Cholm.  It does, at least, provide players with more of a feeling that they are actually fighting in the snow than green-covered maps do.  The major irritation about the map, however, is not its artwork, but rather the fact that CH did not pay to have the map folded in half.  It is one large, flat 12″ x 18″ map, which makes it much larger and more awkward to store than any other official or unofficial ASL products–unless the user folds it himself.  Players should be warned that, unfolded, this map is susceptible to being bent.  Moreover, the use of this nonfolded map also apparently necessitated Critical Hit abandoning a ziplock bag for storage, simply encasing it in shrinkwrap instead.  This means that, after opening the product, ASLers will not be able to store the product in its original packaging unless they carefully cut a slit open in the shrinkwrap to preserve it.  Critical Hit clearly needed to fold the map.

The only other noteworthy change to the newer edition is the inclusion of a small number of die-cut counters, none of which are necessary for play.  The counters include a partial sheet of “winterized” Soviet infantry (i.e., the figures on the counters are wearing white uniforms) and a partial sheet of Soviet and German AFVs and guns.  There are no Italian counters.  The counters are essentially filler designed to attract purchasers who drool at the idea of more counters. 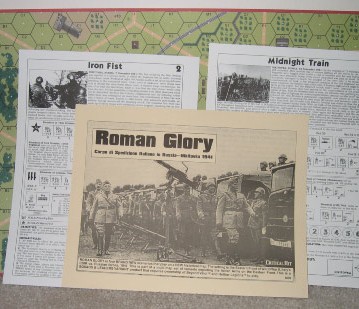