Purchasers of Rout Pak 1 may be excused for being somewhat confused about exactly what it is that they purchased, as the term “Rout Pak 1” appears only on the bottom of the cover sheet, while much more prominently displayed are the words “Aussie Pak.”  Is this a Paddington Bears pack?  No, not at all.  Rout Pak 1 is a collection of reprints of scenarios that originally appeared in the Rout Report, a Michigan-based ASL newsletter published by Kurt Martin (who would go on to be a prominent designer for Critical Hit).  It bears the words “Aussie Pak” apparently because the scenarios included all feature “the British and Commonwealth forces in WWII,” though why exactly this merits being called “Aussie Pack” is not quite clear, as only one (!) of the 8 scenarios actually features Australians.

Of the scenarios, RP1 (Morning in Mouen) is a frequent tournament scenario.  Also good are RP2 (The Glory Road), RP3 (Fire and Rain), and RP7 (No Quarter).  Generally speaking, Rout Pak 1 is a good buy.

2nd Edition comments:  In 2014, Critical Hit with little fanfare released a second edition of Rout Pak I, dubbed “Rout Pak 1 2014 Edition.”  The scenarios are the same, but reformatted to a new type of scenario card Critical Hit debuted in 2014, which is of considerably higher quality (including some use of color) than previous Critical Hit scenario cards.  Additionally, a couple of scenarios have their authors identified by name. 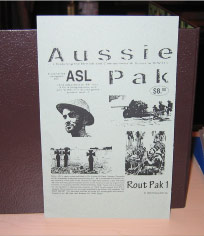