3rd Edition (i.e., El Alamein: Ruweisat Ridge Monster Edition): This item has not been examined by Desperation Morale and its contents cannot be confirmed. It contains a historical map consisting of an unknown number of 12" x 18" glossy heavy paper/light cardstock map panels, rules, probably 8 scenarios, and possibly a countersheet.

Ruweisat Ridge (RR), designed by Dan Dolan, is surprisingly the only desert historical module published to date.  Though the desert rules are not particularly popular, one would think that the lure of the Desert Fox would attract enough of an audience to support more such modules.  RR depicts fierce fighting during the First Battle of El Alamein in July 1942 between British and New Zealand troops defending the eponymous ridge from assaults by German and Italian divisions (making it one of the only historical modules to feature Italian troops).

The most famous, or infamous, aspect of RR is its large map, which was actually a playtest map created by Dan Dolan, which Critical Hit’s Ray Tapio decided to use as the actual map that would appear in the published version of the module.  As a playtest map it was not bad, but its crude nature is far from suitable for a professional publication.

Despite the map, RR has a good reputation.  The campaign game is only four campaign dates long, which makes it very manageable in size (there is also an option for cutting out the initial campaign date, which takes place at night).  The scenarios, not surprisingly, are vehicle intensive.

2nd Edition (i.e., El Alamein:  Ruweisat Ridge) Commentary:  El Alamein: Ruweisat Ridge (EARR) is the latest in Critical Hit’s cynical and hasty effort (for example, El Alamein is spelled El Amamein on all of the scenario cards) to republish its entire catalog.  Unlike many of the other quickie revision & reprint efforts, EARR might actually be worth the effort, because the module has enjoyed a kind reputation and still is an extremely rare example of desert action on a historical map.

As little as possible was done to update the module (the Critical Hit version of this statement is as follows:  “We tried to keep the feel as ‘retro’ as possible while enhancing the new edition”).  The one big change, of course, is that a revised map was created that used standard contemporary Critical Hit artwork instead of the colored pencil monstrosity that was the original map.   The area depicted on the EARR map is not exactly the same as in the original RR.  It looks like a significant improvement.

The original RR contained a set of unmounted counters, most of which were captured Allied vehicles.  This version has none of those.  Instead it provides one countersheet of German/Italian SMC/MMC/SW and one countersheet of British SMC/MMC/SW.  All of these counters duplicate counters already in ASL and thus simply add to the cost of the module without adding much else (since most players will prefer to play with official counters rather than Critical Hit counters).  The same is true of the duplicate half-countersheets with German, British and Italian AFVs.  Theoretically, these AFV counters could be useful for the campaign game, which is likely to exceed the number of certain AFVs that appear in the core modules.  However, the AFVs provided in the Critical Hit countersheets do not match all of numbers and types of AFVs found in the campaign game, with the result that players will still need to scrounge an additional counterset.  Very sloppy.

In 2017, Critical Hit released a new edition of its classic Ruweisat Ridge module with an extra-large map featuring extra-large hexes.  Critical Hit boasts that the map is 36 square feet (i.e., 6′ x 6′), which is certainly large, but also highly impractical.  The map artwork was allegedly tweaked to add additional detail.  Critical Hit claims the module comes with “new color die-cut counters” but does not specify and in fact may come with fewer counters than the previous edition. It does come with rules and scenarios–both probably the ones of the previous edition, though the scenarios may be tweaked.

2018 note:  In 2018, Critical Hit released an “Uber Monster Map Set” for separate purchase which contains a Ruweisat Ridge map even larger than the extra-large map of the 2017 edition. Needless to say, this is impractically large. 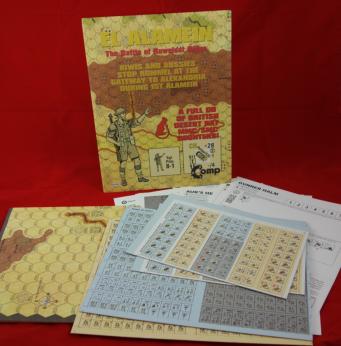