The announcement of the publication by Michael Dorosh of a “Scenario Designer’s Handbook” (SDH) came as a surprise to many in the ASL community, as Dorosh had a very tiny ASL track record.  In addition, Dorosh had not had an ASL scenario published, though he had created some scenarios for a World War II computer game.  Some wondered what the SDH had, suspiciously arriving on the heels of the eerily similarly titled Scenario Designers Guide, published by Desperation Morale the previous year, did not.

However, for the most part Dorosh concentrated on providing resources that might be useful to would-be scenario designers, especially novice ones, rather than advice on how to design scenarios (a good thing, given Dorosh’s lack of having done so).  The largest part of the lengthy (about half of its 210 pages) book is taken up with descriptions of the organization of various small unit forces in World War II, showing regimental, battalion and company level organizations for a variety of nationalities and forces (it would have been helpful to have the nations covered in the table of contents, as the countries seem to be ordered more or less randomly).

The level of detail and accuracy of the various historical sections varies with the author’s familiarity; some sections, such as those for Commonwealth countries, are not surprisingly quite detailed, while others are less so (the Chinese communists, for example, get only 3 lines of text, one of which is the fairly inaccurate “the Communists had little formal unit structure.”  However, for major participants in the war, such as Germany, Britain, the United States, etc., the sections here can provide some useful information, especially for people unfamiliar with World War II era tables of organization and equipment.

Other resources include suggestions on where to go to get scenario ideas or information (some of which will be very useful to the beginning scenario designer, while others, however, are dubious, such as listing the 100-volume Japanese official history of World War II, which is available only in Japanese and Chinese); reduced sized versions of official ASL maps and overlays (to help designers choose which boards to use for a scenario without having to manhandle the full-sized boards all the time); examples of the creation of (unpublished) scenarios; medals and decorations; rank and authority tables (it is hard to understand how these could be at all useful); moon phases from 1939-1945, and more.  There is an eclectic mix of materials here that range from the quite handy (such as the small maps) to totally useless padding.  How much someone will find the publication useful will probably depend largely on their own levels of historical background knowledge.

The major drawback that the SDH has when it comes to “just trying it” is its high cost ($60).  This is not necessarily due to greediness on the part of the producer, but rather reflects his choice to use color with his print-on-demand service.  The system he used requiress either all pages be in color (which means the customer must end up paying for them) or none of the pages; one cannot mix and match as one can in traditional printing.  Was the decision to use color justified?  It is hard to say, but it probably will make some fence-sitters less willing to take a chance on it.

For non-fence-sitters who are interested in scenario design and have money to burn, the SDH may possibly have some resources that could be useful. 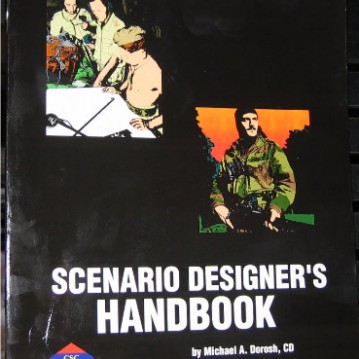