Released early in 2008 with little fanfare or marketing by Stavka Archives (which is basically Swedish ASLer Melvin Falk), Scenario File #1 is an unusual publication.  It is unusual in the sense that it appears to be rather derivative of official ASL products and scenarios.

While any person or persons can produce ASL compatible material, to use “official artwork” or to duplicate the “look and feel” of official products would violate copyright laws.  Despite this, there are third party publishers from time to time that do replicate the official artwork and “look and feel” of ASL scenario cards in their products.  This appears to happen more often overseas, where perhaps there is less fear of legal action.  Scenario File #1 is an example of this practice, essentially duplicating the layout and artwork of official ASL scenario cards.

However, this is where the similarities begin, not end.  In addition to the scenario cards, this product also includes a blatant photocopy of Overlay 6 from Action Pack #2.  And an observant ASLer soon discovered that the scenarios in Scenario File #1 bore eerie similarities to previously published scenarios.

Most of the scenarios in Scenario File #1 are essentially old Streets of Fire scenarios converted to standard geomorphic mapboards, often with numerous additional SSRs added.  The result appears to be a collection of scenarios that are neither original nor necessarily even very playable (one scenario features 75 Soviet squads, for example). 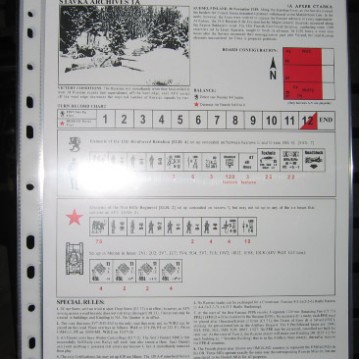