Contents:
One issue had 4 scenarios

Scenarios for Wargamers was a short-lived quarterly magazine from Maryland with scenarios primarily for miniatures rules systems.  It was published by Jay Karamales from 1993-1994.

Issue #4 bucked the miniatures concentration and contained 4 ASL scenarios, all from Anzio 1944, as well as order of battle information and other supporting materials.  Supposedly the ASL scenarios were well-received by subscribers, so SFW decided to put at least one ASL scenario in each issue.  However, there were no more issues.

In 2007, ASLer Paul Dutram received permission to make the scenarios available again, and they are now a free download on the Gamesquad.com Web site.

The scenarios are all set in Jan-Feb 1944 at the Anzio beachhead in Italy. 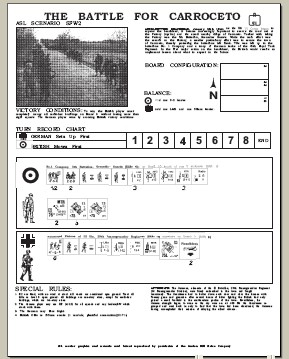