Because, to date, Sherry Enterprises and Schwerpunkt have been close to synonymous, much additional information about Schwerpunkt is contained in the publisher description.

Schwerpunkt debuted at the ASLOK ASL tournament in 1996 and a new issue has appeared at that tournament each year since (in 2000, there were two issues, with one also appearing in the spring).  Each issue of Schwerpunkt is essentially the same:  a short magazine consisting largely of designers’ and players’ notes for each scenario, and one or two articles, and 12 scenarios on 6 cardstock inserts.  The magazine gradually changed to a glossy cover, then glossy interior pages, and finally glossy scenario cards as well.  It has always been solely black and white.  Overall, there has been remarkable consistency (or lack of evolution, depending on how one wants to look at it) in the magazine over the years.

The scenario cards originally resembled official ASL scenario cards closely.  By 2000, however, the Copyright Wars had reached Schwerpunkt and its 2001 issue (and all subsequent issues) debuted a scenario card style devoid of counter art (squads are designated merely as 4-4-7, for example, while AFVs are identified solely by name).  For some reason, Schwerpunkt has not gone the route of other third party publishers (including Critical Hit, Heat of Battle, Lone Canuck, Fanatic Enterprises, and others) and developed alternative artwork.  Because of this, the scenario cards now look a little primitive.  Moreover, AFVs specified on scenario cards are frequently difficult to locate, because the scenario cards provide no additional information such as movement points, gun size, and so forth (they do sometimes provide MG values if there is more than one variation).  In the future, it would be nice if Schwerpunkt either obtained its own counter artwork or at the very least included more information on the vehicle counter representations (strangely, Schwerpunkt does provide gun size for Guns, but not for AFVs).

Schwerpunkt scenarios tend to be very straightforward, using only geomorphic mapboards (including ASL Starter Kit maps but not DASL maps).  SSRs are usually few, and tend not to be chromey (Volumes 5 and 6, featuring Medal of Honor and Victoria Cross recipients, are notable exceptions).  Similarly, SSRs that provide variable reinforcements, purchasable units or reinforcements, fortification points, or similar innovations will not be found.  Exotic situations are also quite rare, though not nonexistent.   About half of all Schwerpunkt scenarios are designed by Evan Sherry (they typically are the first scenarios in every issue); the remainder by a cadre of Schwerpunkt designers (particularly Michael Faulkner, Brian Williams, and Hugh Downing).

Many issues of Schwerpunkt have gone through more than one printing.  Volume 1, for example, debuted at ASLOK, where players found several pieces of errata.  Later copies of that volume included updated scenario cards.  In particular, Volumes 1-6 were reprinted after 2000 with revised scenario cards that replaced the old, copyright-violating artwork, creating two different-looking versions of these scenarios.

Schwerpunkt Volume 1 (SP1) The first issue of Schwerpunkt was short, with no article content other than designers’ notes for each scenario and players’ notes for each scenario.  In his opening salvo, editor Evan Sherry stated that the publication was designed to directly support the Florida ASL Tournament (although in fact, the tournament would eventually cease while Schwerpunkt lived on).  Sherry declared that the magazine was intended as a medium for independent scenario designers, in which the designer himself would retain editorial control of the scenario.  A good Schwerpunkt tradition was started (which, strangely, few others have copied) by citing one or two historical references on each scenario card.

Actions in volumes of Schwerpunkt are varied, not thematic.  Volume 1 includes actions set in:

The first issue of Schwerpunkt had especially small and short scenarios; the first, SP1 (Raiders at Regi) featured only 4.5 U.S. squads attacking 3.5 Japanese squads.  In the 11 years since its publication, all of the scenarios have received extensive play, and many have turned out to be exquisitely balanced, including the classics SP2 (Holding the Hotton Bridge) and SP11 (Pomeranian Tigers), as well as SP3 (Duel at Reuler) and SP6 (Udarnik Bridgehead).

Even some of the scenarios that are not as well balanced are still fun to play.  Overall, it is a very good set of scenarios, although they tend towards the very small and short. 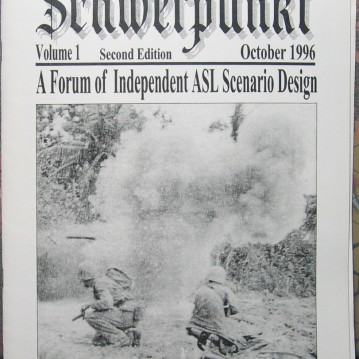