Schwerpunkt celebrated its 10th anniversary with what else but another issue of Schwerpunkt that looked much like the previous nine.

Schwerpunkt Volume 10 (SP10) is, as is customary, dominated by designers’ and players’ notes for the included scenarios.  However, it also has a lengthy historical article on the Polish Army (up to 1940 only).  It also includes a very interesting interview with John Hill, the man who designed the original Squad Leader game and made the entire ASL world possible.

The actions in SP10 are varied and include:

One of the scenarios, SP111 (Why at Erp), was the first full ASL scenario published to use an ASL Starter Kit map (y).

Ten issues in, the Schwerpunkt guys seem to have scenario design down to an art.  There is a classic scenario here, SP115 (The Five Pound Prize), as well as several others that are quite fun to play, including SP110 (The Chernichivo Shuffle), SP114 (Seizing Gyulamajor), SP116 (Loonies and Leicesters, with an interesting SSR), and SP118 (Seizing the Sittang Bridge).

Most of the scenarios in SP10 are good and fun to play; this is one of the better volumes of Schwerpunkt. 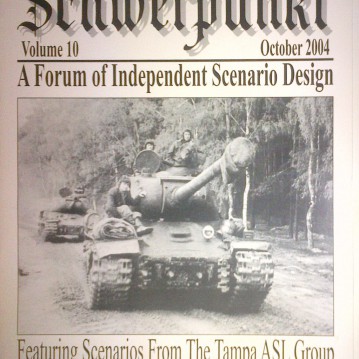