In 2005, Schwerpunkt Volume 11 (SP11) debuted at ASLOK, with no real departure from tradition.

Along with the usual Schwerpunkt suspects–designers’ notes and players’ notes–the 11th iteration of the magazine contained an article by Evan Sherry on representing Japanese infantry companies in ASL and an odd article by English professor Rusty Witek on the “Languages of ASL.”

This issue of Schwerpunkt features an unusually high number of PTO scenarios.  One of them, SP127 (Bleed Gurkha Bleed!), is far less balanced than its two previous companions in the “Gurkha trilogy.”  However, the other three PTO scenarios are all balanced and fun to play:  SP125 (Nunshigum), SP128 (Rupee Reward), and SP126 (Malignant Mahrattas).

In addition to the PTO scenarios, SP123 (The Badger’s Breath) is a balanced and fun scenario and SP131 (Pocket Panzers) isn’t too bad, either.  Unfortunately, however, some other of the scenarios in SP11 just don’t seem very balanced.  PTO fans may like this volume more than other ASLers. 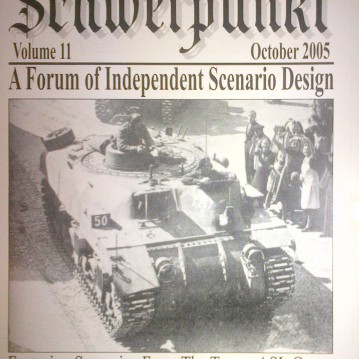