Schwerpunkt Volume 12 (SP12) features the usual designers’ and players’ notes; it also features a lengthy article on the British in ASL by Brook White.  Many ASLers may consider this overkill, as they were already treated to an endless two-part treatise on the British Army in ASL Journals #6 and 7, which itself was an expansion and rewrite of an earlier article on the subject.  How much can you say about the British Army?  Apparently not enough (in fairness, the article here is better than the ASL Journal article by Charles Markuss, as there is more of an actual attempt to relate it to ASL).  The issue also contains another article by Rusty Witek on language usage in ASL; most people will not care for it.

The scenarios in SP12 are overwhelmingly medium-sized, with 2 small and 2 large scenarios also thrown in.  Most could probably be played in tournaments.  The scenario selection is not very varied; the vast majority of the scenarios are 1944-45 East Front or West Front actions.  Only one scenario set in Algeria and another on Corregidor offer any real variation.  Included are:

The scenarios have their usual tendency to skew towards 1944-45 actions.

Schwerpunkt could benefit from including more scenarios on more exotic situations rather than just the “usual suspects.”  World War II was actually really big.  The scenarios are also somewhat vanilla in that few of the scenarios have any interesting SSRs to help recreate the flavor of the historical action.  There are exceptions here, such as SP139 (Oder Dare), SP143 (The Battle for St. Cloud), and SP144 (One More Day of Freedom).

Axis Minor troops and AFVs find their way here (as well as in the first Rally Point, released at the same time) for possibly the first time in Schwerpunkt’s entire history.  Evan Sherry leaned heavily on Krisztián Ungváry’s book on the siege of Budapest in 1945.

SP12 has several solid scenarios in it, including SP137 (The Boszoki Relay), SP141 (Broken Beek), and SP138 (Lacking Coordination).  It is not a bad volume for Schwerpunkt. 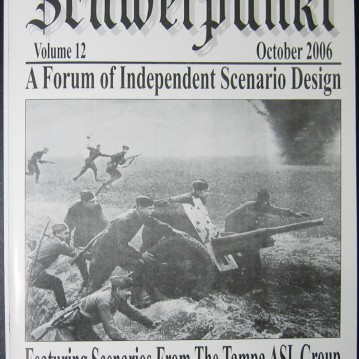