In addition to the usual players and designers notes for the included scenarios, Schwerpunkt Volume 13 (SP13) includes as its main feature a lengthy article on the Romanian Army in ASL by Brook White.  However, it does not cover the rather substantial period of time in which the Romanians fought on the side of the Allies against the Germans.  In many ways it reveals more about what people don’t know about the Romanian Army than what people do know about it, as there is so little material available in English on the subject. Brian Williams also contributes a “guns as targets” flowchart.

SP13 includes a basically equal number of small, medium, and large-sized scenarios.  As is usual for Schwerpunkt scenarios, SSRs are at a minimum.  Most of the scenarios in the pack have fewer words in all of their SSRs together than many other publishers’ scenarios have in a single SSR.  One scenario, SP151 (Bulanov Rebuked) does employ simultaneous set up.  There is no OBA, no Air Support, nor any Night Rules in any of the scenarios.

Possibly the most unusual feature of this issue of Schwerpunkt is a relatively heavy use of ASL Starter Kit mapboards–four scenarios use a Starter Kit board:  SP147 (The Zebra Mission), SP148 (The Bears of St. Denis), SP150 (The Legrew Maneuver), and SP151 (Bulanov Rebuked).   Boads v, w, y, and z are used.

ASLers may flock to SP147 (The Zebra Mission), because of its inclusion of a Pershing tank, but the most interesting situation is probably that in SP153 (The Wrong Side of Victory), which pits an attacking Japanese force of 17 squads (half of them 2nd line and almost all of them lax), well armed, against a dozen 2nd line British squads, who are reinforced by 2 more squads, a 9-2 leader, and two armored cars.  The Japanese win by placing more infantry VP within a key area than the British have.  They can attack across a wide front, spreading the British out, but the terrain channels them somewhat and they have a long way to go, plus the British know, of course, where the Japanese must end up, regardless of which route they take.  Unusual for this sort of scenario is the use of VP for measurement, rather than squad equivalents.  The units do not even have to be in good order; they can be broken, for example.  This struggle of lax Japanese versus cowering British should result in a desperate end-game struggle near the victory area.

Both scenarios are quite well-balanced and fun.  Also very good is SP150 (The Lebrew Maneuver).  It and SP154 (On the Road to Hell) are probably the two-most played scenarios of the bunch and both are quite good.

Actually, almost all of the scenarios in SP13 are worth trying; there are only a couple of unbalanced scenarios among them, making this one of the better volumes of Schwerpunkt in some time. 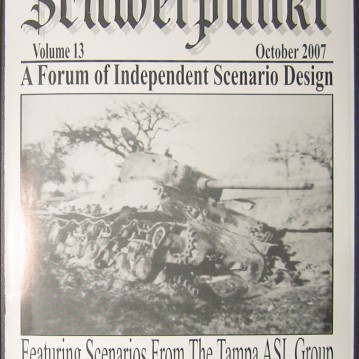