If ASLOK is the Mecca of ASL gamers, for many ASLers it is the annual release of the latest issue of Scherpunkt that is one of the main rewards of going.  October 2008 was no different, with the appearance of Schwerpunkt Volume 14 (SP14).

Like every issue, SP14 is a shortish magazine combined with a dozen scenarios of no particular theme.  This issue’s contents are essentially a long article on the French Army by Brook White, and players and designers notes for all of the scenarios.

However, as with Playboy, nobody buys Schwerpunkt for the articles.  They buy it for the scenarios (unlike Playboy).  Volume 14 continues a trend exhibited in the past several issues:  the scenarios tend towards the large in size.  In this issue, half of the scenarios are large in size, with the other half divided between small and medium-sized.  One scenario, SP157 (Edge of Extinction) does hearken back to the early days of Schwerpunkt, when small to very small scenarios were common (however, with its AFV-related VC and small size, it looks like it could be dicey).

A number of the scenarios in SP14 may not be as balanced as one would like.  However, SP159 (The Lisjanka Epitaph) should satisfy, and SP158 (The Fond Dagot Drag-Out) is worth trying (if one can get past the scenario title; it is an early war French vs. German combined arms action.  For PTO fans, SP162 (The Buddha’s Belly) is a good largish early war PTO scenario.  SP164 (Tanks But No Tanks; see previous comment on scenario titles) has the novelty value of Soviets fighting Poles; in early playings it has been one of the more popular scenarios. 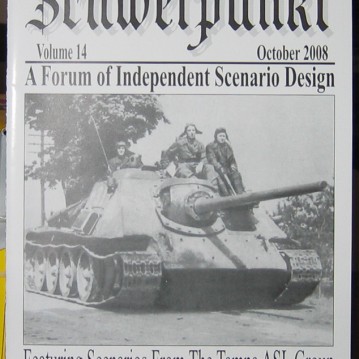