Schwerpunkt Volume 16 (SP16) is the latest in the venerable series of magazine/scenario combo packs designed and published by Evan Sherry and his Tampa-based crew of grognards.  Some things, it seems, are inevitable, including death, taxes, and another issue of Schwerpunkt.  Luckily, Schwerpunkt is typically far more welcome than the others.

As always, this issue of Schwerpunkt includes a smallish magazine (24 pages), plus 12 varied scenarios.  The feature in the magazine is an article by Brook White on the USMC in ASL (because that’s what the USMC needs, dammit, more attention); the rest of the magazine is taken up entirely by designers’ and players’ notes for the included scenarios.

Again, as always, the 12 scenarios represent a mix of actions from different theaters and periods, including Soviets vs. Germans (Soviet Union 1941 [2 scenarios], 1943; Germany 1945), Americans vs. Japanese (New Guinea 1942, Philippines 1945, Okinawa 1945),  French vs. Germans (France 1940),  Spanish Nationalists vs. Spanish Republicans (Spain 1937),  Canadians vs. Germans (Germany 1945),  Slovaks/French vs. Germans (Slovakia 1944), and Soviets vs. Hungarians (Hungary 1944).  One cannot help but notice that, this time around, Schwerpunkt features a far more rounded and varied set of scenario settings than in previous years, with half of the scenarios taking place before 1944.  It would be pleasant to think that this Web site might have had a gentle influence in this regard, but whatever the reason for it, the result is nice.

Would-be purchasers should keep in mind that many of the scenarios in this volume use recently printed official maps (the Schwerpunkt folks, bored with older geomorphic maps, are always the quickest to embrace newly released ones, often even obtaining pre-release playtest copies to help them more quickly design scenarios using them).   Fully 9 of the 12 scenarios use one or more of the following relatively recently (as of this writing) released mapboards:  53, 55, 56, 57, 58, 59, 1a, 2a, and 3a.  Thus players who are not up-to-date in their ASL mapboard collecting should take note.

The scenarios in this volume range tends towards the large; 7 of the scenarios can be considered large, with 3 medium-sized and 2 small.  However, none of the scenarios are huge, and even a couple of the large scenarios could conceivably be played in a tournament setting if players are speedy with their vehicles.   As is typical with Schwerpunkt scenarios, SSRs tend to be minimalist.  One scenario uses Air Support, two scenarios use OBA; no scenarios employ the Night rules.  One scenario, SP190 (Bottcher’s Corner), unfortunately employs a great many terrain changes, where one terrain type is substituted wholesale for another.  In this case, Brush is treated as Marsh/Swamp, elevated roads do not exist, and hills are treated as level 0 terrain.  Such wholesale substitutions are often hard for players to keep in mind, especially if more than one exist at the same time.  Several playings of this scenario at ASLOK 2010 were impacted by players forgetting the terrain changes.

Fully 10 of the 12 scenarios include AFVs, and 7 of these have 5+ vehicles for at least one side.  One scenario, SP185 (Von Renesse’s Recon) is an all-AFV scenario.

Among the scenarios, one early favorite has been the atrociously titled SP181 (The Elefant of Surprise), a very straightforward East Front action pitting 16 Soviet squads with 6 AFVs against 11 German squads and two (here’s a shocker) Elefants.  The two Elefants set up HIP, leading to the question, “How can you tell if an Elefant is HIP in the hex adjacent to you?”  The answer:  “There’s a trailbreak in the peanut butter.”  When you are finished laughing, you can reflect on the fact that this is a fun and balanced scenario–the most popular in the issue.

Also interesting is SP187 (Stairway to Heaven), the first Spanish Civil War scenario published by Schwerpunkt since its inaugural issue way back in 1865 (“Other than that, Mrs. Lincoln, how did you like the scenario?”).  In this action, the Nationalists are represented by Axis Minor counters, while the Republicans, coming from the volunteer “International Brigades” that fought on the Republican side, are represented by their nationality’s counters:  Americans (early war) and French.    This lends a nice exotic feel to the entire scenario.

SP188 (On the Road Again) is an interesting American-Japanese combined arms clash taking place in the Philippines in January 1945.   However, early results strongly suggest the Japanese have an advantage, so if this is played, consider giving the U.S. player the balance.  In this scenario, 16 elite and first line Japanese squads, accompanied by 6 AFVs, swarm in from a variety of directions to engage a group of 8 elite U.S. squads, buttressed by two tank destroyers and a Stuart.  Two thirds of the way into the scenario, they see some much needed reinforcements in the form of 4 more elite squads, another tank destroyer and another Stuart, and two armed jeeps.  The tactical situation is interesting, because the Japanese essentially must get past, through, or around the Americans to have at least 10 good order VP within 3 hexes of a particular location.  However, going through the Americans takes time and getting past them involves a lot of open ground.  Both sides have interesting tactical decisions to make.  Early results suggest the Japanese have an edge (they do have the benefit of having the last player turn, and the possibility of using the advance phase to crawl into the needed hexes), but the scenario is still a fun one.

Another US-Japanese scenario, SP190 (Bottcher’s Corner), also presents an interesting tactical situation with several different battles going on at the same time, but it does have the disadvantage of the wholesale terrain changes alluded to earlier.  SP186 (Beaufort’s Feast), a German-French action, also seems pretty balanced.

One other scenario, also execrably named, deserves mention:  SP191 (Tatra Salad), designed by Pete Shelling.  This scenario takes place during the all-but-forgotten Slovak Uprising, which took place in the late summer of 1944 at the same time as the more famous Warsaw Uprising, which has totally eclipsed it in memory.  During the Slovak Uprising, dissident Slovak army units joined Communist partisans in an effort to seize Slovakia, overturn the puppet government, liberate the country, and open a way for Soviet troops.  However, as with the Warsaw Uprising, much went wrong in the Slovak uprising’s initial stages, and a hastily-assembled German force (including the eponymous makeshift “Tatra” Panzer Division) defeated the effort.  This scenario depicts an attack of the improvised “Tatra” Division against positions held by Slovak units (represented by Axis Minor counters) and re-armed French prisoners (represented by French 4-3-7 squads).  The tactical situation as well as the countermix are both enjoyable.

Overall, Schwerpunkt 16 is a good mix of different actions, nationalities, and tactical situations.  It has not, however, gotten as much play as either its predecessor or its successor. 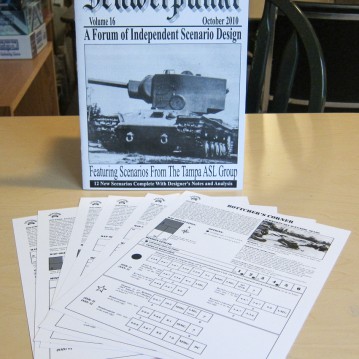