Schwerpunkt Volume 17 (SP17) is the latest in the veteran series of magazine/scenario combo packs designed and published by Evan Sherry and his rowdy crowdies (especially Hugh Downing, Mike Faulkner and Brian Williams).

As with every version of Schwerpunkt, it combines a baker’s dozen of scenarios with a small magazine, the bulk of which is devoted to designers’ and players’ notes for the included scenarios (this issue also includes an article on the American 4th Infantry Division and the German 272nd Volks-Grenadier Division in the Huertgen Forest–essentially drawn from the books on those two units by Robert Sterling Rush and Douglas E. Nash, respectively).

As has become customary with ASL products since MMP began releasing post-Board 52 boards, the board mix is heavily dependent upon recently (as of this writing) published boards.  To play all the scenarios in the pack, players will need to have boards 5, 19, 20, 24, 41, 44 (2 scenarios), 50, 51, 52, 53, 57, 59 (2 scenarios), 60, 62 (2 scenarios), 63 (2 scenarios), 1a/1b, 2a (4 scenarios!), 3a.  While most ASL players enjoy the novelty of playing on new boards, ASL scenario designers tend to tire of older boards more quickly (because they repeatedly playtest scenarios on them) and as a result are flocking to the newer boards.  This puts pressure on ASL players to purchase the new products to ensure that they can continue to play the bulk of newly released scenarios.  Of course, who doesn’t want to purchase more ASL?

Several of the scenarios are interesting in one way or another.  SP193 (Kamikaze Gorge) is interesting because of a comparatively rare Schwerpunkt appearance of a “flavor” SSR (i.e., an SSR designed not simply to delineate the conditions of combat but to impart some of the unique flavor of that particular action).  In this scenario, the defending Japanese benefit from an SSR which basically allows them to turn two of their tanks into suicide tanks equipped with explosive charges attached to them that will go off if they ram another tank.    The scenario is one in which the Americans are fighting the terrain as much as the Japanese, as they have to surmount the Board 50 hill, then cross a hard-to-cross stream).  It is balanced and fun.

Another scenario may be interesting because of the hardware involved:  SP194 (Requiem for a Dreadnaught) features two of the Soviet early war T-35 tank “monstrosities” (along with a KV-1 thrown in for good measure).   It is also quite balanced.  As of 2014, the two most popular scenarios in the pack are also two of the most balanced:  the Soviet/German SP202 (Fiery Finale) and the American/German SP204 (Yankee Pride).

However, the most novel scenario is SP201 (Doppleganger), which depicts a very unusual situation:  the mutiny of a battalion of Ukrainian troops in German service against their fellow troops (also Osttruppen).  This scenario thus features SS troops fighting SS troops (one of the only reasons to actually use the black SS counters that came in A Bridge Too Far).  There’s a some quibble-worthy stuff here–there are far too many 8-morale squads wandering around in this battle between forces that were actually low-quality, and the mutineers are given super-partisan qualities to boot–but the novelty value is still pretty high.

SP195 (Retreat from Hannut) is welcome as a relatively rare early war Schwerpunkt scenario; moreover, it also features a lot of French vs. German early war armored action–a lot of ASLers welcome those “wars of the tin cans.”  In this scenario, the French have to do a sort of fighting retreat–exiting at last one tank off the board edge while hanging on to a few buildings.

Unfortunately, the scenario that may be the most immediately attractive to people might also be the most unbalanced.  SP196 (Hussars and Hounds) is a 1945 scenario involving a British attack.  At just 4.5 turns, the scenario is quick playing; moreover, both sides have some vehicles to play with.  The Germans only have 8 squads, 3 of which are 2nd-line, while the British have 11 squads (3 of which are elite), plus a 9-2 leader and various other goodies.  However, it also seems like it is very difficult for them to win; they have to essentially take three of four buildings, which are fairly spaced out, and they just have very little time in which to do it.  It was played 8 times upon its debut at ASLOK in 2011 and the British did not win once (2014 update:  ROAR confirms it is not balanced).

Hussars and Hounds also brings up something else that Schwerpunkt has been doing an awful lot of lately.  It’s not clear whether it is positive or negative, but it is worth mentioning.  In Hussars, the British do not actually have to control any buildings to win.  Rather, they must ensure that there are no unbroken German MMCs in a certain number of buildings.  Even the victory conditions are written backwards for this:  “The Germans win at game end if they have at least one unbroken German (non-vehicular crew) MMC(s) in ≥ 2 of the following buildings, etc.”

SP195 (Retreat from Hannut) is similar–to prevent the French from winning, the Germans must insure that the French do not have 7VP “of unbroken infantry” in certain buildings.   SP202 (Fiery Finale) also has backward victory conditions (victory conditions specified from the defender’s point of view rather than, per official ASL scenarios, the attacker’s):  “The Russians win at game end if they have a Good Order MMC” in various building hexes.  Time and time again, this or similar phraseology is used; in essence, the attacker is no longer required to control various buildings/hexes/etc., but merely sweep them of unbroken defenders.  This phraseology also occurs in scenarios in Rally Point 6, released at the same time.

What does this mean?  In essence, it is a tacit admission that the attacker in question does not have enough time in the scenario to win “traditionally” (through control of the geographic objective).  Essentially, what the Schwerpunkt designers are really doing, consciously or unconsciously, is lopping off the last turn or half turn of a scenario and wording the victory conditions to accommodate this.  It is, in a sense, a design shortcut to allow a shorter scenario.  Is this a good idea?  Is it a fudge?   The answer is not immediately obvious.  However, it is interesting to note this obvious design technique (see the Desperation Morale blog for more on this). 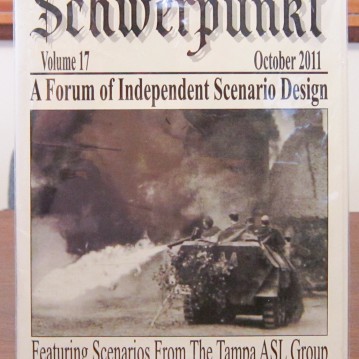