Schwerpunkt Volume 18 (SP18) is the umpteenth magazine/scenario pack combo published by the Boys from Tampa.  It need hardly be said that this is, by far, the longest-running consistently published ASL product series in the hobby.  At 18, Schwerpunkt is now eligible for the draft.

The magazine portion of Schwerpunkt is short, at 24 pages.  It consists of a lead article by Mark Pitcavage, “Throwing Snowballs in Hell:  The Art of the Low-Odds IFT Shot,” players’ and designers’ notes for the scenarios, and an article on British and American reconnaissance units by Brook White, a perennial Schwerpunkt contributor.

ASLers buy Schwerpunkt for the scenarios, though, not the articles (similar to Playboy).  Often in volumes of Schwerpunkt, the bulk of the scenarios are designed by Evan Sherry, with other Schwerpunktians contributing some.  This volume is more of a smorgasbord, with contributions from a variety of Schwerpunkt folks–Evan Sherry (2.5), Brook White (1), Randy Thompson (.5), Mike Faulkner (1), Hugh Downing (1), and Mike Augustine (2)–as well as scenarios from “guest” designers with relationships with Schwerpunkt, including Pete Shelling (2), Mark Pitcavage (1), and Bill Sisler (1).  This gives players an opportunity to see a variety of different design styles, though most have that “Schwerpunkt flavor.”  Also typical of recent Schwerpunkt volumes, the scenarios in this volume tend to use the most recently-issued boards, as Evan Sherry and others tend to get tired of the older ASL boards.

A number of the scenarios in this volume depict interesting situations.  One of the better larger scenarios is SP214 (Makela’s End), which is set during the Spanish Civil War and features American and Canadian volunteers.  It uses Soviet counters for the Republicans and Allied Minor counters for the Nationalists (though they are considered Axis Minors).  The tactical situation is interesting and it is fairly replayable, too.  It may be the best scenario in the issue.

At the other end of the scale is SP210 (Tea at Three), a tiny scenario (9 squads vs. 5.5 squads which set up practically on top of each other) that can be finished in no time at all.  It depicts a tiny, elite British force (5 x 6-4-8 squads, a 10-2 leader, a 9-1 leader, a hero, an LMG, and 5 DCs) attacking a larger but mediocre German force on a small hill.  The scenario is fun and frivolous, perfect when you need a scenario that can be played super-quickly, but it favors the Germans (the British balance, adding an 8-0, probably won’t help; a better balance might be to add another American half squad).

One fun scenario is SP213 (The Mighty Have Fallen), a 1941 Fil-American-Japanese PTO action.  The attacking Japanese have 14 squads (plus lots of toys) and 6 AFVs; they must assault an American/Filipino force of 12 x 4-4-7 squads with 5 AFVs.   SP211 (The Apiary) pits a large Soviet force loaded for bear against a deceptively slight set of German defenders.  SP215 (Encircle That!) is a barely-tournament-suitable scenario that pits 16 Soviet squads and 6 AFVs against 12 Hungarian squads and 2 AFVs that get reinforced by 2 German Panthers.

One last editorial note:  SP207 (Resiste Et Mords) depicts a May 1940 German attack against the Belgian Chasseurs Ardennais.  Desperation Morale would just like to inform all ASL scenario designers that the Belgians had many units in their army other than the Chasseurs Ardennais and not every Belgian scenario needs to feature them. 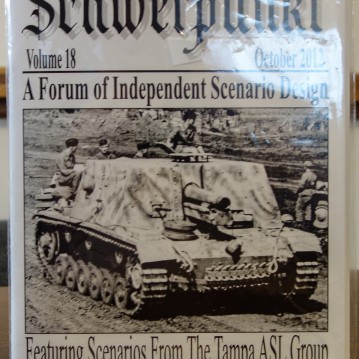