Schwerpunkt Volume 19 (SP19) debuted at ASLOK 2013, the latest iteration of the longest-running non-newsletter publication devoted to ASL (indeed, only the newsletter View from the Trenches beats it among all publications).  This time around, however, the magazine portion of the product is pretty slim, coming in at only 20 pages (not seen since the very first issue).

Its article content consists of a single article, on U.S. infantry squads, plus designer and player notes for each scenario.  Given that nobody at Schwerpunkt particularly likes writing the notes, one has to wonder if Schwerpunkt would be easier to produce and just as popular if it were just a scenario pack alone.

The scenarios are overwhelmingly small and medium in size, with a couple just barely creeping over the line to large, but none of them are actually what one would call meaty.  They are essentially tournament-sized scenarios–most of them are small in terms of turns as well.  No scenarios use OBA, Night or Air Support Rules; indeed SSRs in general are typically few and brief.  These are scenarios one can just start setting up and playing, without having to worry about complicated SSRs or victory conditions.   However, it also means that some of the scenarios might seem a little bland or generic.   This will be a turn-off for some and others won’t care.  The size and simple nature of the scenarios makes them rather novice-friendly, with the important caveat that Schwerpunkt scenarios typically require the attacker to be quite aggressive.

The scenarios that look the most interesting are the ones featuring less commonly used forces.  SP218 (Városliget Park) depicts a Hungarian counterattack by a “Police Assault Battalion” on a Romanian position in Budapest in early 1945.  Both sides have some good toys to play with.  The Hungarians must clear Romanians from along a road to win.  SP228 (Booster Shot) occurs during the 1944 Slovak Uprising, when Soviet-backed partisans and elements of the Slovak puppet state’s army rose up against the Germans more or less at the same time as the Poles rose up in Warsaw, and just as unsuccessfully.  The scenario, designed by Pete Shelling, depicts a rare Slovak attack, complete with 5 AFVs.  In a rare (for this pack) “flavor rule,” the Slovak AFVs may not move until all Slovak infantry have finished moving, in order to simulate their lack of combined arms experience and training. Another interesting scenario is SP220 (Hoepner’s Edict), which features a sharp little combined armed action between the French and Germans in 1940.  Fans of tin cans will want to take a look at it.

Based on early ROAR results, the most promising scenario is Sp217 (The Go Devils), a German-American tussle.

Overall, Schwerpunkt 19 looks like a fairly typical issue of Schwerpunkt.  Since one can never have enough tournament-sized, playable scenarios, some of the scenarios here will get a good amount of play. 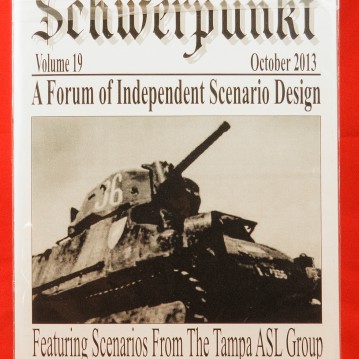