The second issue of Schwerpunkt, Schwerpunkt Volume 2 (SP2), looked much like the first.  SP2 contained the magazine’s first true article, independent of scenario or designer notes:  a brief article on pillboxes in ASL by Bob Walden.  Still, the majority of its pages are designers’ and players’ notes for the included scenarios.

As with the first volume, SP2 contained 12 varied scenarios, set in:

SP2 is thus a somewhat Americanocentric volume, with the U.S. appearing in more than half of the scenarios (of course, the Germans appeared in more, but everybody fought the Germans).

Schwerpunkt’s sophomore outing was not as good as its first. More than half of the scenarios suffered from balance problems, while one of them, SP24 (Forest Fighting in Latvia), appears to be generic rather than historical.

However, SP2 still includes several very good scenarios, including SP14 (The Green House), SP18 (An Arm and a Leg), SP19 (Men from Mars), and SP22 (Tod’s Last Stand).  Consequently it still has the core of solid scenarios that any ASL product needs to be get-worthy. 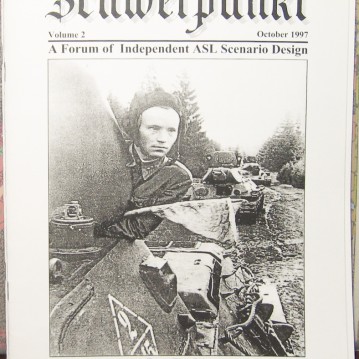