If Schwerpunkt, the long-running annual ASL magazine with scenarios, could somehow drink liquor, it would now be legally old enough to do so, having reached its 21st iteration.  On the other hand, 2015 marks only the 20th anniversary of Schwerpunkt, rather than the 21st, as Schwerpunkt Volumes 5 and 6 came out the same year.  So put that bottle of peppermint schnapps back on the shelf, Schwerpunkt.

Twenty-one volumes in 20 years is nothing to sneeze at.  It is a total that beats that of the ASL Annual, the ASL Journal, Tactiques, Rate of Fire, Critical Hit Magazine, Backblast, Le Franc Tireur, and other ASL magazines that also serve as scenario packs.   During that time period, though not entirely unchanging, it has maintained a pretty consistent look and feel as well.

The 24-page magazine part of the product contains, in addition to its usual player notes and designer notes, a historical article by Brook White on the  Chinese in ASL titled “The Chinese in ASL,” as well as a gameplay article by Mark Pitcavage, “Master of Your Domain:  Using Terrain and Force on the ASL Battlefield.”

The scenarios are a relatively even mix of small, medium, and large actions, but none of the large actions are really very large, so most of the scenarios here will play reasonably fast.  No scenarios utilize OBA, Air Support or Night rules.

The longest scenario clocks in a 6.5 turns.  The average scenario length is 5 turns long.

The typical Schwerpunkt scenario relies heavily on the trinity of Order of Battle, Terrain, and Victory Conditions to create the dynamics and flavor of a scenario, with VC typically taking a backseat to the others.  One will notice that SSRs are noticeably missing from this list of priorities and that is because most Schwerpunkt scenarios deliberately minimize SSRs, especially eschewing SSRs that are designed to help the scenario replicate the particular flavor and feel of the action.  That is certainly the case for Volume 21, where two scenarios even have the sole SSR of “EC are Wet with no wind at start. Kindling is NA.”

This is worth noting because it speaks to the nature of many Schwerpunkt scenarios.  While on the one hand, this means that players can usually drop right into a game without having to “grok” unusual or complicated SSRs, it also runs the risk of vagueness or indistinctiveness, in which two actions involving similarly composed forces on similar terrain can seem too, well, similar.  For several years, Schwerpunkt really concentrated its scenarios in the years 1944-1945, which exacerbated this basic tendency and led some ASLers to assert that Schwerpunkt were “all the same.”  This was unfair, but there was a kernel of truth behind the exaggeration.  In recent years, Schwerpunkt has made more of an effort to have scenarios from the entire length of the war–Volume 21 is a decent example–which has somewhat lessened this tendency.

Often it is to the Order of Battle that Schwerpunkt looks in order to create distinctiveness.  So, for example, one of the scenarios of Volume 21 is SP245 (Matira’s Secret), which features an M-26 Pershing tank.  Well, actually it doesn’t–it features an experimental “super” Pershing with a 90LL MA (TK 27) and circled 26 front armor.

Similarly, SP251 (Kettenkrad Blitz), as its title suggests, features the tiny motorcycle-halftrack combo known as the Kettenkrad.  This small 1941 East Front scenario features a German attack by 8 tanks and 7 half-squads riding Kettenkrads, assisted by 3 more tanks as reinforcements.   The defending Soviets start off with 6 squads and an Infantry Gun, but get 7 T-34s into the action soon enough.  As the OB suggests, this is basically an armor action, with the few infantry units there to contest control for a few buildings.  The problem with the Germans is that their entire infantry force consists of half-squads.  Playing an ASL scenario with an all half-squad force is like having sex while wearing two condoms.  Sure, it is still technically sex, but you’re not likely to enjoy it very much.

Volume 21 also adds a new iteration, of sorts, to its “Gurkha” series.  Schwerpunkt’s “Gurkha” trilogy featured three PTO scenarios featuring Japanese and (no surprise here) Gurkhas, with titles such as the original “Die Gurkha Die!,” the flamethrowery “Burn Gurkha Burn!” and the Romanovian “Bleed Gurkha Bleed!”  Now comes SP242 (Ciao Gurkha Ciao!), which takes the action out of the PTO to Tunisia and dubiously replaces Japanese with Italians.  Regardless of how well the scenario itself plays, it marks a big difference from its predecessors.  In the scenario, the Gurkhas must run up a bald hill against entrenched Italians with a lot of firepower.  Smoke is essential for the Gurkhas, so much so that the scenario not only gives them two mortars but also gives them two free Smoke counters to place on turn one.

Also worth mentioning is SP246 (Triggerline Zoebel), a playably-sized late-war “heavy metal” action pitting 14 Soviet squads, an 82mm MTR, and 6 tanks (2 x T34-85, 2 x IS-2, 2 x IS-2m) against a defending German force of 9 squads, a halftrack, 2 Panthers and 2 Tigers.  In a rare “flavor” SSR for Schwerpunkt, the first time an IS-2m crosses the stream in the scenario, all German AFVs must take a TC or b Recalled.  The German player will be white-knuckling those rolls, no doubt.

Overall, Volume 21 seems like a decent effort for Schwerpunkt.  No scenario stands out as a “Play me now, bitches” scenario, but none are deal-breakers, either. 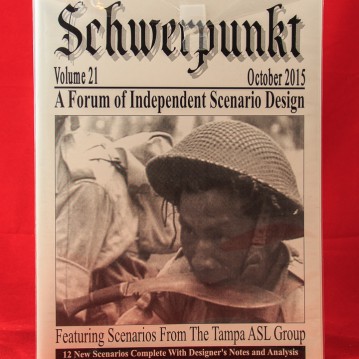