In terms of article content, SP3 contained, in addition to its usual designers’ and players’ notes, a short article on AFV vs. AFV combat in ASL by Evan Sherry and an article on “psychological warfare” in ASL, also by Sherry.

As is typical for Schwerpunkt, the scenarios are heavily weighted towards late-war actions.

SP25 (Two Pounts in Return) is a rare (for Schwerpunkt) desert scenario, as is SP32 (Over Open Sights) (the latter is only three turns long!).

This issue contains a number of good scenarios.  Particularly recommended are SP29 (Schloss Bübingen), SP30 (Evicting Yamagishi, a Japanese vs. Soviet scenario), SP33 (The Eternal City), the classic SP34 (Frankforce), and SP36 (Desantniki).  It is one of the better issues of Schwerpunkt. 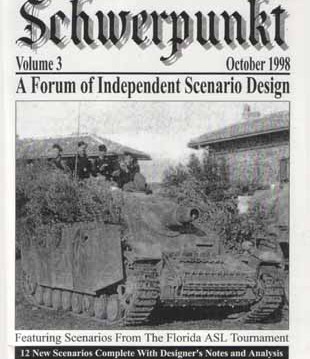