Schwerpunkt Volume 5 (SP5) is one of the only “themed” volumes of Schwerpunkt (along with its successor, Volume 6).  The theme focuses on American actions on the basis of which a Congressional Medal of Honor (America’s highest military medal) was awarded.

Not surprisingly, the major article in the issue, by Evan Sherry, is on the Congressional Medal of Honor (other articles feature Audie Murphy and ASL heroes), and each included scenario features one or more recipients of that medal.  There are also the standard designers’ and players’ notes.

Because of the theme, the pack is naturally U.S.-centric, although the scenarios are rather varied given that restriction.  Actions include:

The scenarios do retain that usual Schwerpunkt late-war emphasis, but it is true that far more U.S. forces were in action in 1944-45 than earlier, and consequently, more decorations were awarded.

Unfortunately, some of the rules for these valorous heroes were not that great; comparatively, this is one of the less popular volumes of Schwerpunkt and its scenarios tend to be less played.

The Audie Murphy scenario (SP49, Audie Murphy) gives an idea of some of the tortured special rules to represent the Medal of Honor recipients:  Murphy is a 10-3 heroic leader; he wounds as a leader rather than a hero; he can automatically gain possession of the AAMG on an M10 GMC and when firing from an M10GMC wreck (only) has a special -4 heroic DRM.  He can also move around with a field telephone that can call down 150mm artillery.

However, several of the scenarios are worth investigating, including SP51 (Stryker’s Charge), SP57 (Big Tuol Pocket), SP53 (Thorne in Your Side), and SP50 (Paco Station). Most of the scenarios in the pack are decently balanced. 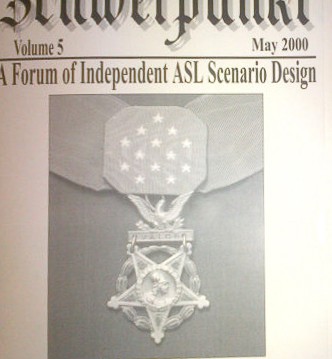