Along with its predecessor (Volume 5), this Schwerpunkt Volume 6 (SP6) represents one of the only “themed” volumes published, this time focusing on recipients of the Victoria Cross.

The major article in the issue, by Michael Faulkner, explains the medal, while the included scenarios feature recipients of the award.   Brook White contributes a historical article on the Indian Army in World War II, while all the usual designers’ and players’ notes are there.

SP63 (Upham’s Bar) is a desert scenario–rather rare for Schwerpunkt, but SP68 (Foote-ing the Bill) is yet another.

Unfortunately, some of the rules for these scenarios were not that great, making this volume one of the less popular of the Schwerpunkt issues.  However, it does contain some very solid scenarios, one classic scenario, SP65 (Ayo Gurkhali!).  Also quite good are SP61 (Objective Exodus), SP62 (ils ne passeront pas), and SP72 (One Tough Canuck).  If one can stomache the hero SSRs, it is not a bad pack. 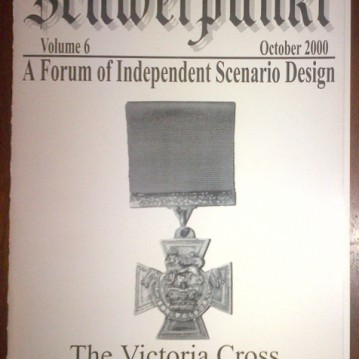