Attendees at the 2001 ASLOK convention were surprised and gratified to find a new issue of Schwerpunkt, Schwerpunkt Volume 7 (SP7) there, because few had expected one.  In January 2001, Schwerpunkt announced that it was suspending sales and production.  The Copyright Wars had played a role in this, as had the move of key Schwerpunkt figure Michael Faulkner from Florida to Ohio.

However, eventually the decision was made to restart Schwerpunkt.  Evan Sherry et al worked around the copyright issue by revamping the layout of its scenario cards and dropping the previous counter artwork.  And it turned out that Faulkner’s move to Ohio was not so bad after all. Thus the ASL world was spared the death of one of its more popular publishers and Shwerpunkt would go on to a great many more issues.

In addition to its usual 12 scenarios, SP7 contains an article on Red Army firepower in World War II by Brook White, and an article on Panzerfausts and Panzerschrecks in ASL by Evan Sherry, in addition to the copious designers’ and players’ notes for each scenario.

Though back from the grave, SP7 looked quite like its predecessors, including the standard scenario mix of actions, including:

As is typical for Schwerpunkt, there is an emphasis on late-war actions.

SP7 celebrates its “I’m not dead yet” status with a large number of fun, well-balanced scenarios, including several true classics, including SP80 (Die Gurkha Die!), SP79 (The Mius Trap), SP74 (The Last Tiger), and SP83 (Boeinked).  Also worth trying are SP75 (Taurus Pursuant, SP76 (The Flaming of the Guard), SP78 (The Golovchino Breakout).  Were it not for the unfortunate SP82 (Norway in Half) and possibly SP84 (Von Bodenhausen’s Ride), one could say that the issue was dog free.

SP80 (Die Gurkha Die!) was the first of a trilogy of similarly-named scenarios set in Burma, all three of which proved popular among players.

SP7 is one of the best issues of Schwerpunkt and belongs in any ASL collection. 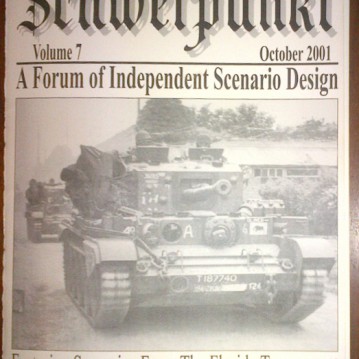