The “resurrection” of Schwerpunkt continued in 2002 with Schwerpunkt Volume 8 (SP8), which looked and felt much like volumes 1-7.

SP8 contained, in addition to the standard designers’ and players’ notes, a lengthy article on Red Army manpower and firepower by Brook White.

The 12 scenarios included a range of actions:

Unsurprisingly, the scenario mix reflects the Schwerpunkt bias towards late-war actions, but even more so than usual.

The eighth volume of Schwerpunkt is not as jam-packed as its predecessor with classic scenarios, but it does contain two all-time classics, SP95 (Burn Gurkha Burn!) and SP96 (Husum Hotfoot), both extremely popular and well-balanced scenarios.  SP95 is one of Schwerpunkt’s best scenarios.

Other good scenarios include SP86 (Bridge at Stavelot) and SP89 (Assaulting Tes). 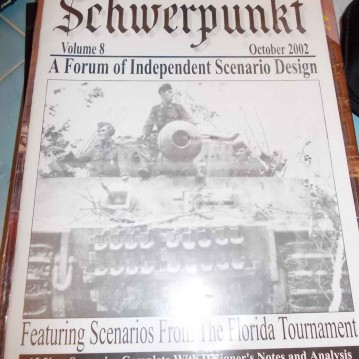