Schwerpunkt Volume 9 (SP9), released at ASLOK in 2003, was the ninth iteration of the venerable series of Schwerpunkt magazines.  It looked much like its predecessors.

Taking a break from the series of historical articles by Brook White, SP9  contains a lengthy gameplay article by Mark Pitcavage on defensive first fire and fire discipline principles in ASL.  It also introduces an “Armor Leader Campaign” by Evan Sherry, a flashback to the infantry leader/armor leader campaigns of the original Squad Leader and Cross of Iron.  As usual, it has a great many designers’ and players’ notes for the scenarios included herein.

The 12 scenarios are a mix of actions, including:

Once more, Schwerpunkt heavily concentrates its scenarios on late war actions, with 8 of the 12 scenarios taking place in 1944-45.

SP9 contains a classic scenario, SP103 (For Whom the Bells Toll), as well as several other fun scenarios worth trying, including SP97 (Twilight of the Reich), SP98 (Pesky Pachyderms), SP99 (The Feineisen Factor), and SP108 (Searing Soltau).  Overall, it is one of the better Schwerpunkt packs. 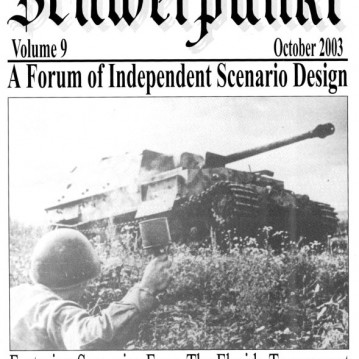