Home > Products > Scotland the Brave / Orders for the Major: The Battle of Normandy 1 / Scottish Corridor I

British ASL designer Ian Daglish, who designed the three-part All American series, returns to Normandy with Scotland the Brave (StB), the first of a two part series (the second being Scotland the Brave II) depicting the Epsom Offensive in late June 1944, one of Montgomery’s key efforts to take the crucial Normandy town of Caen.  The map depicts an interesting stream valley; as in Stonne 1940, the different elevation levels are all in varying shades of green, which is sometimes frustrating (there is slightly more differentiation in the 2nd edition).

The scenario selection is not that great.  Most of them are very small.  StB1 (Honey Trap) features 4 British AFVs versus 5 German AFVs and 3 half-squads.  StB3 (Seaforth Objective) pits 4 German squads and a halftrack against 6 British squads and a carrier.  StB4 (Looking for Trouble), only four turns long, has 3 German half squads and an armored car defending against 4 British squad-equivalents, two carriers, and an AT gun.  StB7 (The Flank of the Black Bull) is all armor, with 10 British AFVs taking on 7 German AFVs.  StB8 (The Lost Platoon), also only 4 turns long, features 2 British squads and 1 half squad against 2 German squads and 3 half squads.  Not that many ASLers are going to be interested in so many scenarios that are so small.

The campaign game (The Crossing Sweepers) is only three campaign dates long, which makes it an excellent introductory campaign game (although it is not balanced:  the Germans an advantage).  Overall, however, this is not that great a module.

3rd Edition (i.e., Orders for the Major):  Many years after the release of the 2nd Edition, Critical Hit published a new version of Scotland the Brave as part of a general attempt to re-release almost all of its product line with new counters and new names (the latter in the hopes that some people and retailers would buy the game twice).   The countersheet that comes with Scotland the Brave is not necessary for play (moreover, a few of the counters have incorrect values).  The sheet largely contains duplicate British and Waffen SS units, the latter in black.  Ignore the back of the packaging, which claims that the product includes a counter sheet “providing Gurkhas, AFVs, Guns and more (424 counters in all),” as none of that is true–Critical Hit is frequently incapable of accurately listing the contents of its own products.

Critical Hit’s treatment of Ian Daglish, the designer of this module, is worth a mention.  Daglish sadly passed away in 2011.  Now, every time Critical Hit mentions his name, they put a “(dec.)” after it, as if it were a suffix of some sort that had to follow his name.  Moreover, with Orders for the Major, a tiny passage at the end of the included booklet said “in honor of the special life-work of designer and author Ian Daglish (dec.), it was decided to reprint this booklet in its original form.”  People familiar with Critical Hit may be more likely to think that the decision was one of convenience rather than reverence.

In any case, there is no real reason why someone who owned the 2nd Edition of this module would need to purchase Orders for the Major.  The re-done map and the gratuitous counters are not worth it–especially at the truly outrageous price of $69.95.   Scotland the Brave originally sold for $26.95 in 1998.  Neither inflation since then nor the inclusion of (unnecessary) die-cut counters could possibly bring the price of this relatively small module with modest components to nearly $70.  This is especially true when one considers that new editions of this product do not need to account for the money originally paid to Ian Daglish (dec.).  In other words, Critical Hit is gouging the consumer with this product.

4th Edition (Scottish Corridor I) comments:  In late 2015, Critical Hit once more changed the name of Scotland the Brave and re-issued the product (in a “Last Word Edition,” which seems highly unlikely).  The major change in this edition is that the large historical map is gone, replaced by a 6-part set of glossy unmounted 12″ x 18″ map panels that must be assembled by the players to form the historical map.  The hexes, and thus the map area, are far larger than in previous editions, so it takes up more space.  Assembling more than four of these panels is a pain.  While the maps are colorful, all of the buildings are rendered in crude bitmaps that have been blown up to such a size that their resolution is crude and jagged.  Thus the map is not really an improvement over previous editions.  In terms of other changes, the historical commentary was deleted from the rules booklet, and the number of counters included was slashed–though all of them are duplicates of official counters, anyway.  The product packaging claims that there are “five sheets of counters,” but there is only one.  At $69.95, this small product is very expensive.  Since this edition has no real improvement over previous editions, players interested in purchasing it are advised to seek out older editions with cheaper prices on the second-hand market. 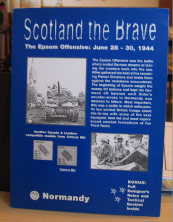