Contents:
Desperation Morale has not examined this product and cannot verify claims of its contents. However, it appears to have a historical map formed from 12 glossy 12" x 18" heavy paper/light cardstock map panels, 2 pages rules, 1 sheet of 1/2" counters (280 counters), and 11 scenarios.

Small Unit Actions #1: Capture of Balta is a historical module based on fighting in August 1941 over the town of Balta, 120 miles northwest of Odessa, with the Germans and Romanians trying to take it, and Soviets trying to defend it.  The product is based, as are all scenarios with the word “Balta” in them, on the pamphlet Small Unit Actions During the German Campaign in Russia, which is widely available.

With only a page or so of rules, there wasn’t much attempt here to create a true historical situation, so the ostensibly historical map is the only thing that salvages the product from genericness.  The map is quite large, formed from 12 glossy 12″ x 18″ heavy paper/light cardstock map panels, which take no small amount of effort to assemble (though not all scenarios use the whole map area).

The map depicts a narrow river (the Kodyma River) running through the middle of the map along its long axis.  One one side, the terrain is mostly open, except for some large patches of marsh near the river.  The other side of the river features a great many grainfields and, at one end, a town, which is presumably Balta. The map is impressive in its size, though the graphics are mundane–and, in the town, not so great, as the same buildings are duplicated numerous times on the map, giving it a very generic quality. It gives the impression–possibly accurate–of hasty work. However, the map does give players several different types of terrain to fight over.

The single countersheet provided is a sheet of Romanian Infantry/SW, all of the counters of which appear to be duplicates of official counters rather than anything new.

The rules, such as they are, are only two pages in length, and the first page is mostly an introduction and historical notes. A few rules clarify the terrain on the map, while another rule (which has appeared in other Critical Hit products) provides a simplified pre-game bombardment rule. A rule also appears for onboard artillery to fire indirectly, via phones.  That’s virtually it, as far as rules go.

No designer or playtesters appear to be mentioned.

The product includes 11 scenarios, 2-3 of which seem to be unrelated to the actions at Balta.  One scenario, CoB#9 (Along the Kodyma), is a monster scenario, 30 turns long and involving dozens of squads on each side. It takes the place of any campaign game and uses the entire long map.

This product is calculated to appeal most to East Front fans, and is a rare example of an historical module depicting actions in the first couple of months of the war in the east. However, as with all Critical Hit products of this era, the question is how much, if any, playtesting and development did it receive. 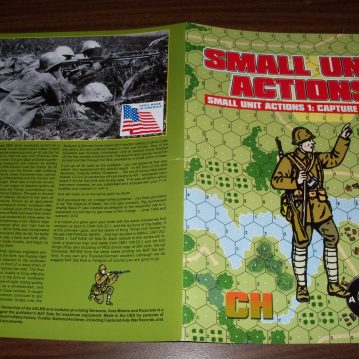