Soldiers of the Negus features 8 scenarios depicting actions from the Italo-Ethiopian War of 1935-1936. It is a reprint of the hard-to-find ELR publication of the same name, designed by Rick Thomas. It does not have the AFV cards that the earlier version did, but more importantly, the counters are die-cut and mounted. However, because all the counters are 1/2″, a few counters normally represented on 5/8″ counters (like snipers) appear in a shrunken version here.  Still, at the time this publication came out, die-cut counters by third-party ASL publishers were still quite rare.

The greatest advantage this scenario pack has going for it, other than the die-cut counters, is its colorfulness. There are rules for the poorly armed Ethiopian Army (it even has some 2-3-7 squads), which can try to flip over the tiny Italian tankettes, as well as rules for terrain features such as Candelabra trees and for Eritrean (Italian colonial) troops. The scenarios are an interesting mix, with most of them somewhat on the large size. Six out of the eight scenarios use desert terrain.

Except for those people with desert phobias, the novelty value alone in this scenario pack makes it worth getting.

2014 Update:  Rumor has it that MMP will include a new edition of this product as part of its upcoming revamped desert rules/Italians Hollow Legions. 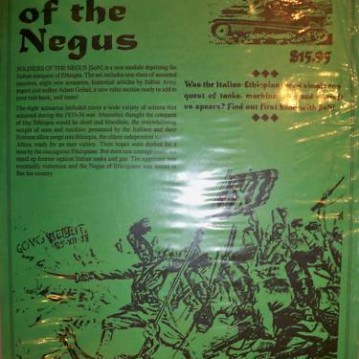