Special Forces is a small scenario pack that brings the men, weapons and vehicles of the British Long Range Desert Group (LRDG) and Special Air Service (SAS) to ASL.  These were both elite special forces units that operated in small groups on raids and reconnaissance patrols behind enemy lines in North Africa, the Mediterranean and Balkans, and France.

As such, it should be acknowledged from the outset that Special Forces is a niche product that may not be to everyone’s tastes.  Not every ASLer wants to tool around desert boards with jeeps and half squads.  For such people, this product is not for them.  However, those ASLers who do find this subject appealing probably would not be able to resist snapping this product up.

Special Forces is small but very complete; it features everything but maps.  There are full rules for the LRDG and SAS (they do not operate the same way), as well as Chapter H notes for their vehicles and weapons (such as Jeeps mounted with twin Vickers MG).  These rules and notes are well done and attractive. Extremely attractive is the small countersheet, which features 1/2″ counters from HOB for the first time in many years.  Interestingly, these counters came out at the same time as the misprinted counters in RbF#4 did, yet there is no problem at all in the printing or die-cutting of the Special Forces counters.

It is unfortunately true, though, that the sloppiness that has been evident in several recent products did not entirely pass Special Forces by.  This is most noticeable on the scenario cards, where the printer punched holes in all the cards (as if they were rules pages), and HOB did not bother to have them redone.  As is typical, the editing and proofreading also leaves something to be desired; on at least one occasion it is unintentionally humorous, as when the Greek SAS unit known as the Sacred Squadron is referred to as the Scared Squadron.  Not quite the elite connotation the unit had no doubt hoped for.

Of the 6 scenarios, two are set in Africa (although only one uses the desert boards), one is set in Greece, two in France, and one in Italy.  Two of the scenarios are Night scenarios.  Because of the nature of the units involved, the scenarios are all rather small (the largest one pits 8 German squads against 14 British half squads).  There are a fair number of SSRs in most of the scenarios to represent the atypical (for ASL) situations.

There are many ASLers for whom this product just might not be interesting enough; their tastes lie elsewhere.  But for those people whose appetites are inclined this way, Special Forces might be worth taking a look at.  Since its publication, it has had very little play, so there is not much word of mouth reputation for or against it. 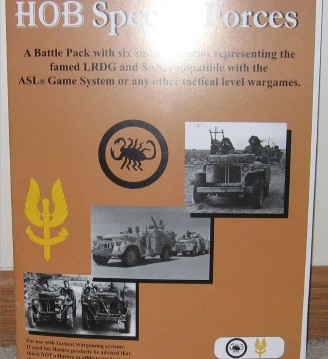