How many times can artwork be re-used?  Stalin’s Fury is the fourth time that Critical Hit’s Stalingrad artwork has been used.  Created for the Dzerhezinsky Tractor Works module in 1997, it was re-used twice (the two editions of Valor of the 37th Guards), and now appears for the fourth time in Stalin’s Fury.

This time, only a small portion of the map artwork is used, blown up to huge (near DASL size) hexes, with a few new items like water towers thrown in to change the terrain to a sort of “generic” Stalingrad terrain.  As such, the artwork will be familiar to most purchasers of Critical Hit products.  One nice aspect of the map is that it does not have the weird extra folds that most of Critical Hit’s mid-2000s 22″ x 34″ maps have had.

The 4 scenarios include one large scenario (well suited for 4 players) and three medium or medium-small scenarios.  Probably only Stalingrad fans will rush to buy this module.

2nd Edition (i.e., Stalin’s Fury II) Comments:  In 2013, Critical Hit released a new version of Stalin’s Fury.  The major difference is the map.  It uses the same artwork as in the original edition–making this the 5th time this artwork has been used by Critical Hit (it has been around the block more than an ice cream truck driver with anteretrograde amnesia).  However, this map is much, much smaller than the version that appeared in Stalin’s Fury–which is not in itself a bad thing, as the hexes on that map were ridiculously large.  The map is printed on light cardstock rather than paper and has a white border around it that players will either have to live with or cut off (like an overlay).

CH did not pay to have the map folded in half.  It is one large, flat map, which makes it  larger and more awkward to store than other official or unofficial ASL products–unless the user folds it himself.  Players should be warned that, unfolded, this map is susceptible to being bent.  Moreover, the use of this nonfolded map also apparently necessitated Critical Hit abandoning a ziplock bag for storage, simply encasing it in shrinkwrap instead.  This means that, after opening the product, ASLers will not be able to store the product in its original packaging unless they carefully cut a slit open in the shrinkwrap to preserve it.  Critical Hit clearly needed to fold the map.

The rules (and Critical Hit’s website) claim that there are six scenarios included, but the copy purchased came with only four scenarios, which may be related to Critical Hit’s generally poor levels of quality control.  The rules themselves are more attractive than in the earlier version.

The countersheet, which was actually printed for one of Critical Hit’s Berlin modules, is entirely superfluous and consists either of duplicates of already existing Soviet counters or of new counters used in the Berlin modules but not here.

Assuming that the copy of this product that one purchases comes with the correct amount of scenarios, this reprint is probably an improvement on the original, largely because it is more practical to play the scenarios on this smaller (yet still sporting generously-sized hexes) map.  The price, moreover, at $24.95 is not as outrageous as it is for some of the other new editions Critical Hit released at the same time as this one. 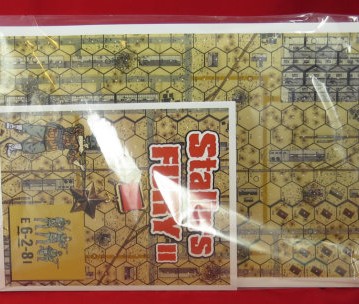