Home > Products > Stand at Vinkt: The Battle for Belgium 1940

Contents:
Desperation Morale has not examined this product and cannot confirm claims of its contents. However, it appears to contain a historical map formed from 9 glossy 12" x 18" heavy paper/light cardstock map panels, 2 pages rules, 10 scenarios, and 1 1/2" half-countersheet (140 counters).

Standt at Vinkt is a historical module set during the invasion of the Low Countries in late May 1940 that depicts fighting in Belgium between the German 56th and 225th Infantry Divisions and the Belgian 1st Chasseurs Ardennais Division near the village of Vinkt near the Albert Canal.  During this fighting, the Chasseurs repelled the German advances numerous times.  Unfortunately, the Belgian Army would collapse not long after.

Vinkt (frequently misspelled as Vinckt by Critical Hit) is designed by longtime gamer Hans Mielant, but this may be an old submission dusted off by Critical Hit and printed, because Mielant’s ASL website is long since defunct and he may not be active in ASL anymore.

Vinkt is played on a largish historical map that must be formed by mating together 9 glossy 12″ x 18″ map panels, which can be a pain, though not all scenarios use the whole map area.  The map depicts a stream or canal (unnamed on all the on-line maps Desperation Morale has examined, but one of countless such waterways crossing the countryside in this area) and the farmland to the north of it leading to the town of Vinkt, on a slight rise. Grainfields abound.

Ten scenarios use this map. Most of them are large or medium in size, allowing for some reasonably meaty action (and providing a contrast to Critical Hit’s other designer of Belgium-related scenarios, Pedro Ramis, who tends to design very tiny scenarios).

The good news, one supposes, is that this is a historical module featuring the Belgians, who are mostly ignored in ASL (except by Pedro Ramis).  The bad news is that this product depicts actions of the Chasseurs Ardennais, which is the one Belgian unit that people actually design ASL scenarios around. A person would be forgiven if he concluded based on ASL scenarios that only one Belgian unit fought in World War II.  So kudos for a Belgian theme, but the Chasseurs are overdone in ASL (although, to be fair, most ASL Chasseurs scenarios are set in the Ardennes but Vinkt is not). 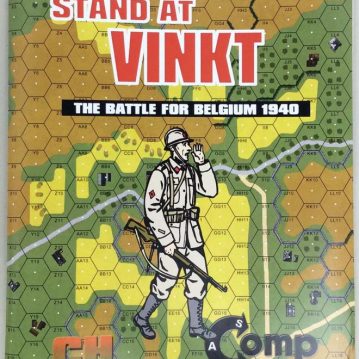