Steel Master Module A (hereinafter SMMA) is an interesting ASL accessory and the first third party product to consist entirely of counters.

The counters of SMMA, which were the first of a planned (but never completed) set for the entire ASL AFV countermix, are AFV-specific turret counters for German and Soviet vehicles.  They seem to be 9/16″ in size (halfway between the 1/2″ infantry/SW counters and the 5/8″ AFV/Gun counters) and are designed to replace the generic CE/BU markers from the standard ASL countermix.

Ostensibly, these counters are designed so that you don’t have to lift up the BU/CE counter to see the gun or armor values of the AFV underneath the marker.  Actually, this will still happen fairly frequently, as the designers left bow machine guns off the counter.  This was a decision made apparently because they are not part of the “turret,” but since such MG will often be fired together, excluding them from the counter means that players will often have to look underneath the turret counter to get the BMG value (unless they have memorized it).  MP factors also don’t appear.

The countersheets are professionally printed and die-cut.  The die-cutting uses side nibs rather than corner nibs, though wargamers prefer the latter (because side nibs leave irritating “bumps” on the sides of the counters that must be cut or shaved off).  The printing job looks good.  The counters are matte (i.e., not shiny or glossy), which makes them look darker than they actually are (especially for the Soviets).  The turret graphics look good; they are very detailed (obviously painstakingly rendered) and apparently to scale (relative to each other).

The main problem with the turret counters is that much of the information on them uses a tiny font.  Presumably, this is partially due to the fact that the designers had to accommodate most of the information of a standard-sized ASL counter onto the smaller turret counter, and also had to accommodate a large turret graphic.  However, there is still room enough to have made the armor factor and MG factors larger–and indeed, if needed, the turrets should have been reduced in size to accommodate this, because in wargame graphic design, form should always follow function, and the graphics should never trump the information.  As a result, players will often have to pick up the turret counters anyway, simply because they can’t read the values on the counters.

This is especially a problem for the Soviet counters, where the dark brown color makes some of the values (especially red values, which blend into the brown of the counter) particularly hard to read.  The vehicle names are also extremely tiny and needed to have been made larger (though the designers did intelligently put them on top of a yellow background to increase contrast and therefore readability).  The main armament and ROF info is perfectly legible; it is the other factors that need to be increased in size.  For some inexplicable reason, the CE status of the counter (on the back) is white (seemingly with a tiny shadow), but the BU status on the front is red and not at all readable on the Soviet counters.  It should have been white, too.

The designers did add some innovations to the counters, such as including smoke dispenser information (always handy), and striking out weapons that cannot fire.  For example, an AAMG with a value that has a red line through it on the BU side cannot fire while the AFV is BU; a MA with a line through it on the CE side cannot fire while the AFV is CE.  This is very handy, especially for novices.   The turret counters AF also take into account the circles and squares on the original counters; thus an AFV with a circled front AF of 3 will be represented by a turret counter that has a non-circled front AF of 2.  This might take a little getting used to for some people; they will also have to remember (if their vehicle gets hit in the hull) that these factors only represent the turret armor, not the hull armor.

Basically, each nationality gets about a sheet and a half worth of counters.  For some vehicle types there are an inordinate number of turret counters–more turret counters than vehicles in the original counter-mix.  For example, there are an amazing 24 (!) BT-7 M37 turret counters–12 for the CMG-only version and 12 more for the CMG/AAMG combo version.  The designers also introduce four new variants, such as T-34s fitted with a high-velocity 57mm gun “to serve as panzer hunters.”

In general, this is an interesting, if not totally successful (primarily for the Soviets) experiment.  Given its pricey nature, one may legitimately ask for whom this product is intended, as it is very much a niche product.  It will probably appeal to some ASL armor aficionados (as the designers themselves pretty obviously are), but probably more to novice armor-lovers than veteran ones (who will realize that these counters may be more work than benefit).

For others, the product certainly has some novelty value and may cause your opponent to go “ooooh” when they see the pretty new counters.  Obviously, collectors will want these counters, too.  It is not, of course, a product for everybody–or even for most ASLers.

Though one can easily understand why Countersmith Workshop would have wanted to “lead” with the German and Soviet turret counters, it might have been better to have started with a lesser nationality, so that the release could serve as a “test run” before trying one of the “big boy” nationalities.  As it is, the designers may eventually want to tweak their basic turret counter designs (especially increasing the font size and the readability contrast), and re-release this product down the road.

If Countersmith Workshop continues with making “alternative” ASL counters, there certainly is a lot they could work with.  There are a number of ASLers out there, for example, who might enjoy Free French counters in French colors, or a set of Canadian counters with their own color scheme, etc.  It will be interesting to see in what direction their journey takes them.

2014 Update: Countersmith Workshop only ever made one more set of counters, for the Americans and British. 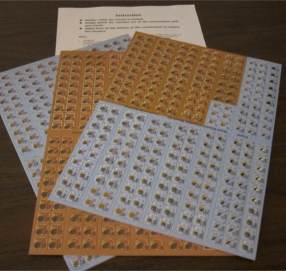